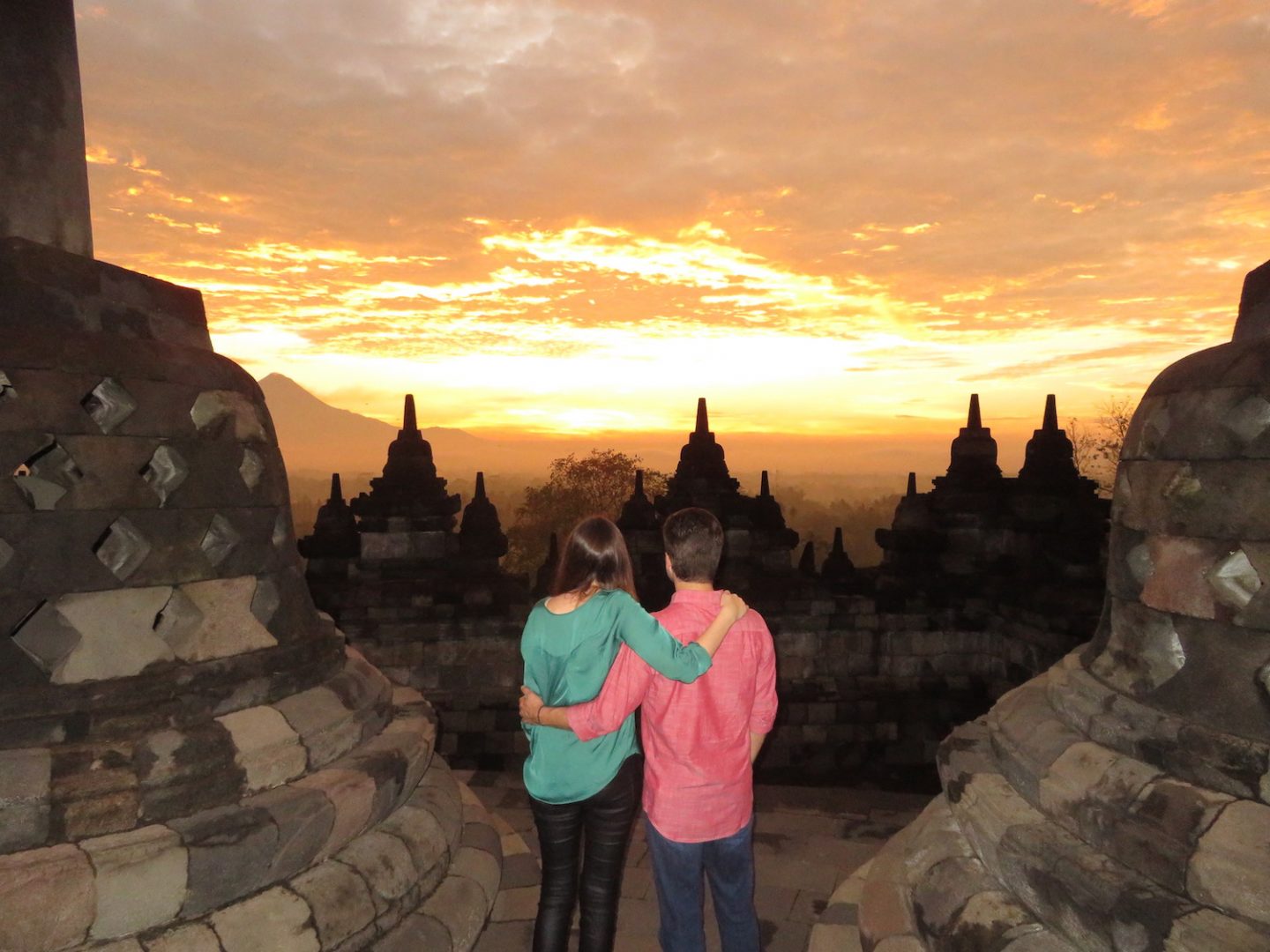 At 3 a.m. we received a call in the room, “it’s time to get up” and so our visit to Borobudur began. With much laziness we got out of bed and of course there was no breakfast at the hotel at that time. We got on the bus with the rest of the group that was doing the fam trip to Indonesia organized by the Indonesian embassy.

The ride from The Phoenix Hotel Yogyakarta by Sofitel to the Borobudur temple took about 40-45 minutes. Although it was early in the morning, Indonesia seems like a country that never sleeps. The street was a one lane going and one lane back, a little narrow for so many cars and even more motorcycles.

A special tour in the early morning

If you want to visit the famous Buddhist temple in the early morning you must enter through the Manohara Resort. It is possible to stay there, otherwise you must go early. Most tours arrive to the place between 5-5:45 a.m. Upon arrival they give you a ticket to enter. The sunrise starts at 5:45 a.m. so it is important to arrive early.

The guide gave us a flashlight to do the tour and I took the opportunity to buy a coffee (which was very bad) and a croissant to appease my hunger. In the end we did not need the flashlight because we began to see the clarity while we were climbing. When we arrived there were already more tourists upstairs, but fortunately we went in October which is the beginning of the low season.

Borobudur Temple is open from 5 a.m. until 6 pm. so you can do a sunset tour if you are one of those who has trouble getting up early.

Borobudur is the most visited tourist site in Indonesia

Borobudur is located in Yogyakarta on the island of Java. In fact it is the same island where Jakarta, the capital of Indonesia is located. However you must take a short flight of one hour and ten minutes to arrive. Some of the airlines that make the route are Garuda Indonesia, AirAsia and Batik Air.

Many people consider this site as one of the wonders of the world. It is presumed that Borobudur was built in the 9th century and that it took 75 years for its construction. Unfortunately there are no historical records, so it is assumed that the temple was abandoned in the fourteenth century. At this time the Hindu kingdoms in Java went into decline and the Javanese conversion to Islam took place.

The temple was built in the middle of two volcanoes, Sundoro-Sumbing and Merbabu-Merapi, and two rivers, Progo and Elo. From the temple you can see a beautiful view of an area that is very fertile. In addition to Borobudur there are two more temples, Pawon and Mendut, which were built in a straight line. 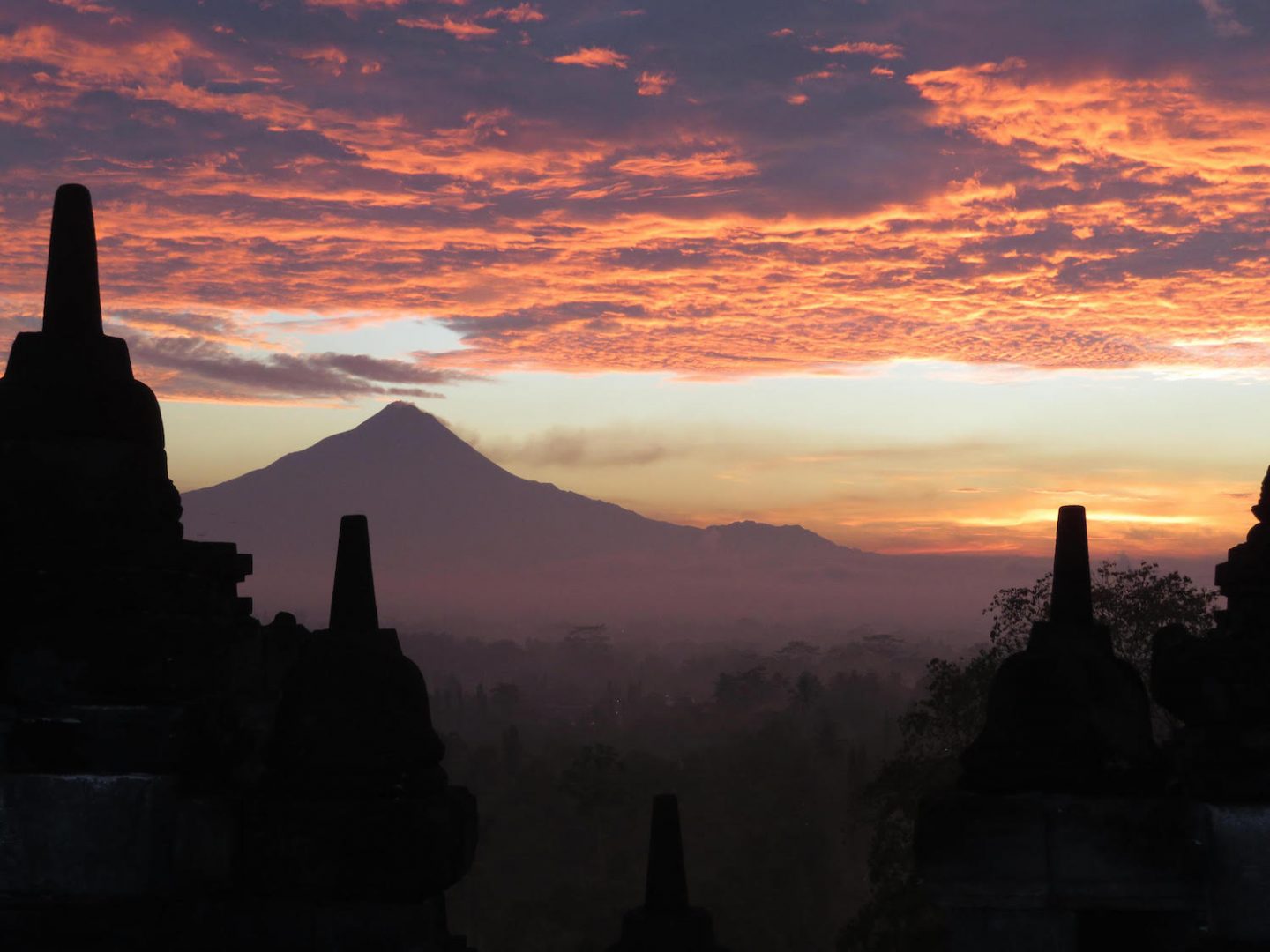 A site rediscovered by the British

Java was captured by the British between 1811 to 1816. In 1815 the Borobudur temple, buried under volcanic ash, was rediscovered by the governor. Thomas Stamford Raffles had great interest in the history of Java and dedicated himself to collecting antiques on his tour of the island. Therefore they told him about a monument buried in the jungle in a town of Bumisegoro.

He sent 200 men to cut the trees and dig the earth to find the monument, which was finally unearthed in 1835. While the interest of the site was spread, it became most vulnerable to thieves who went to looking for souvenirs. Currently you can see pieces of the temple at the National Museum of Bangkok in Thailand. 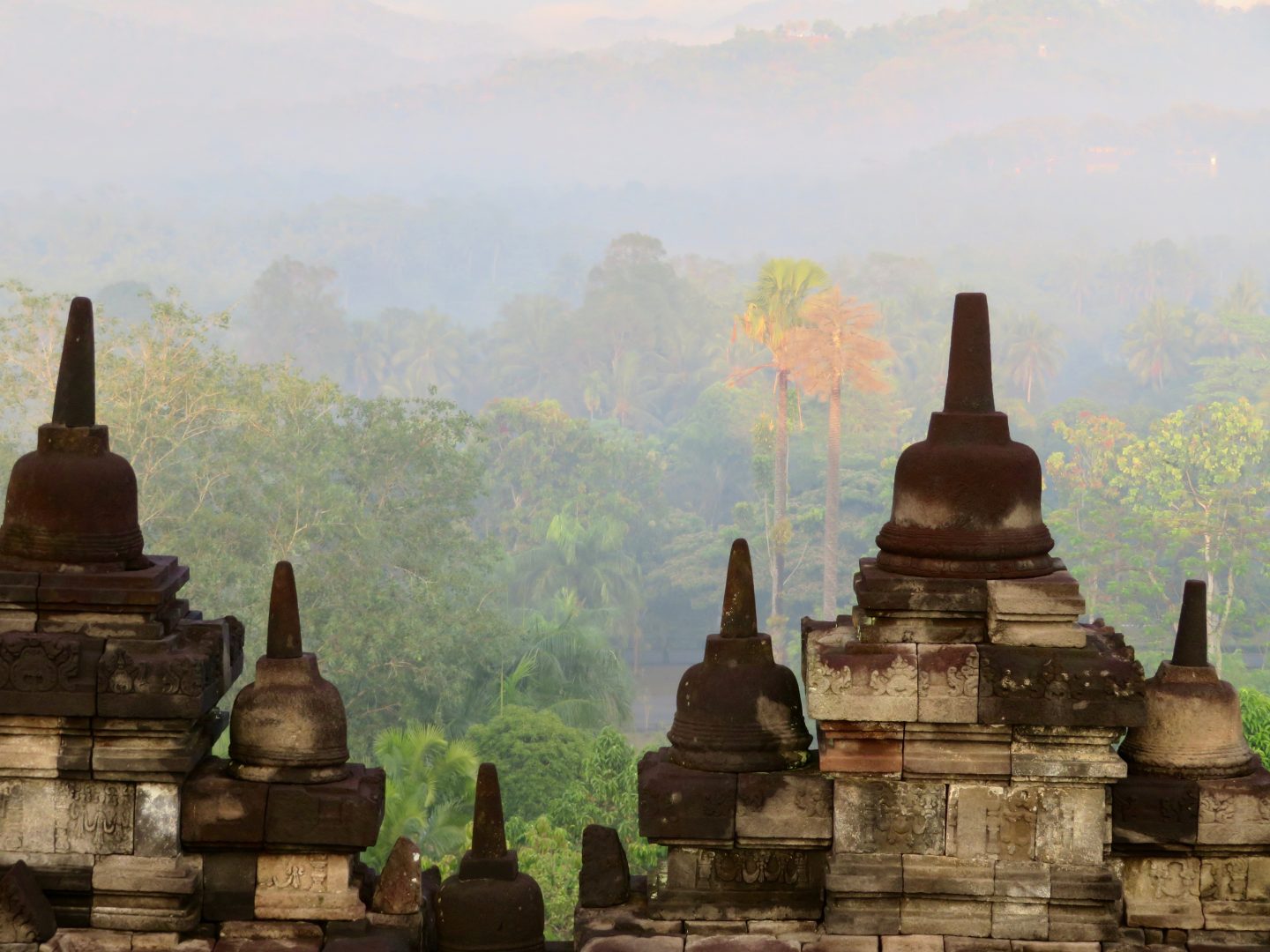 During the Second World War, restoration efforts were stopped and then it was up to Indonesia to ask UNESCO for help to protect the site that was in danger of collapse. Australia, Belgium, France, Cyprus and Germany donated funds for the restoration that took 8 years.

The original structure was built without using cement and its structure is like Legos that are interconnected without any glue. Borobudur Temple measures 123 x 123 meters. Therefore more than one million stones were dismantled and removed during restoration. 600 people participated in the restoration that had a total cost of $6,901,243.

When it was completed, UNESCO listed the site as a World Heritage Site in 1991. Borobudur is the largest Buddhist temple in the world with 504 Buddha statues. 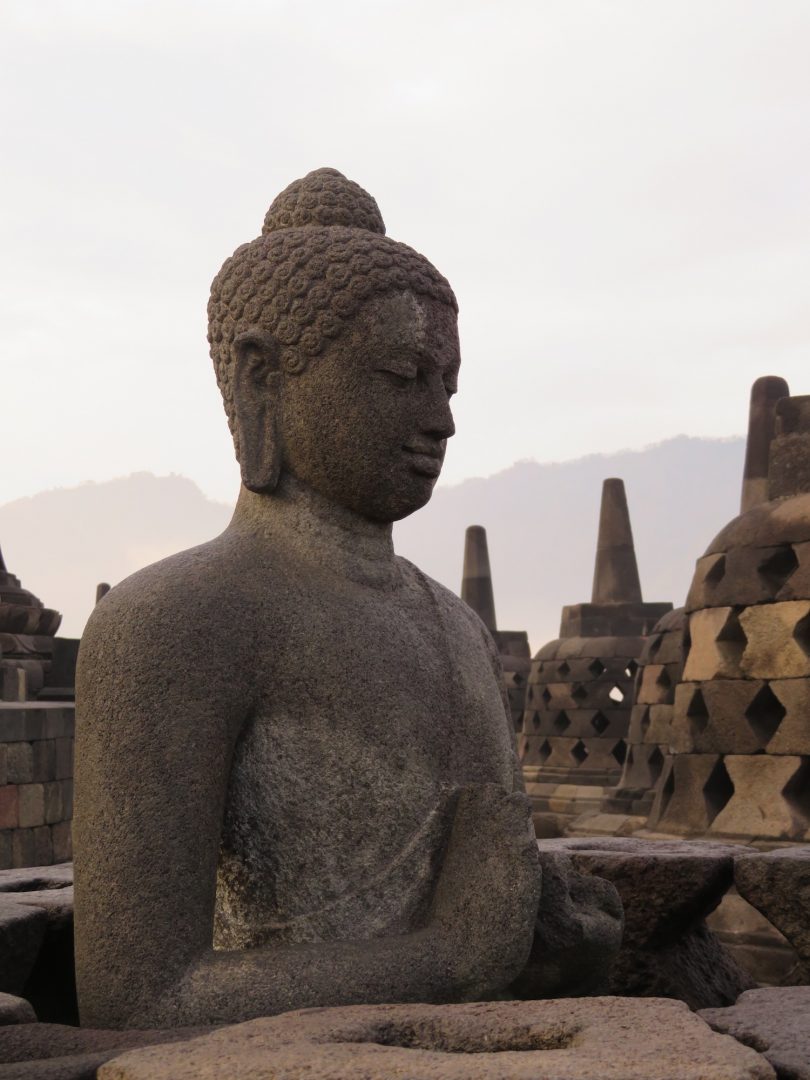 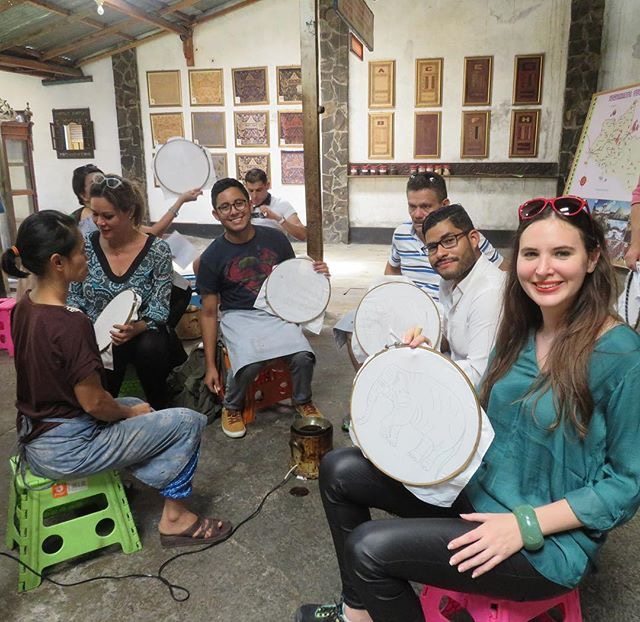 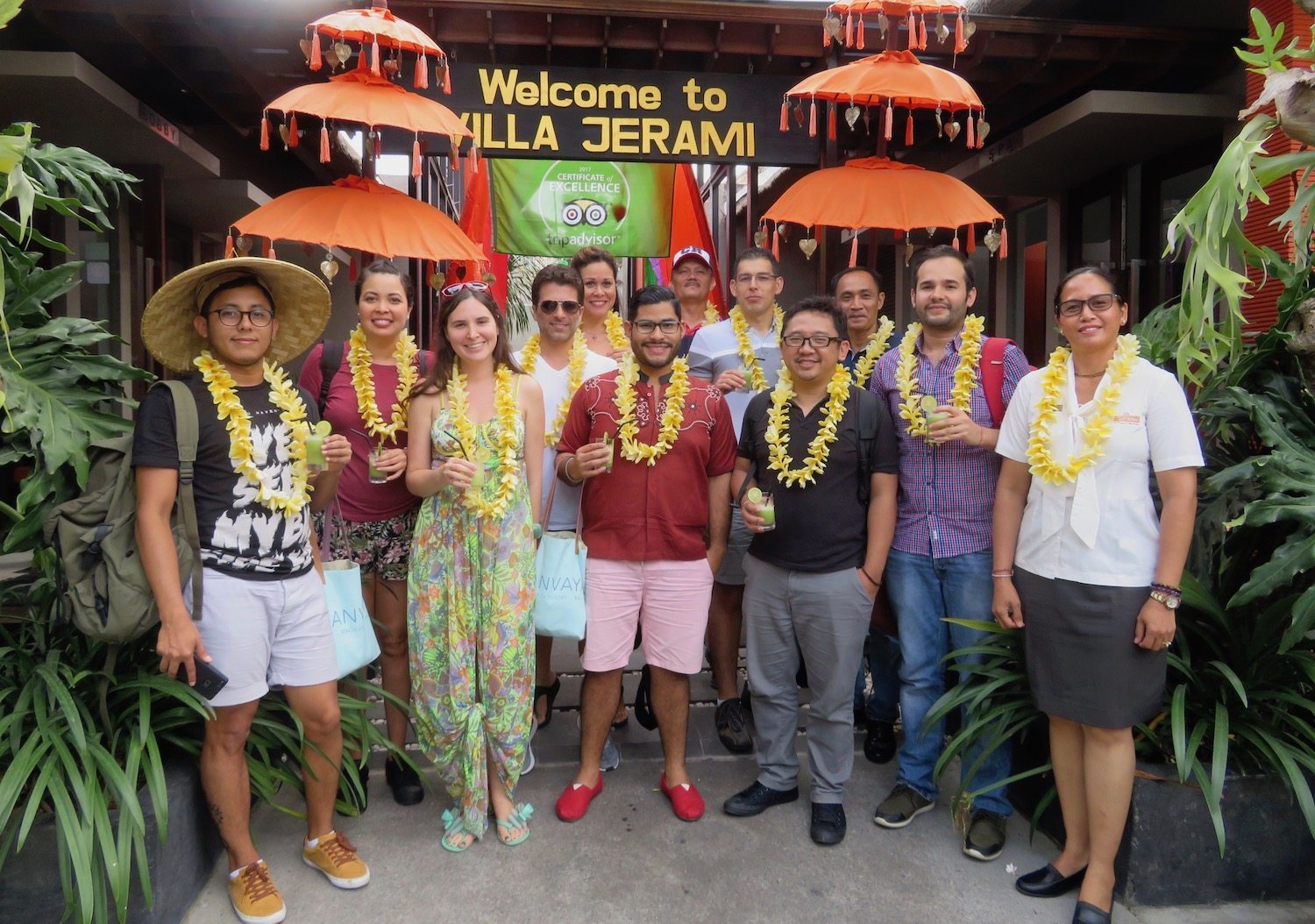 I went on a Fam Trip to discover Indonesia