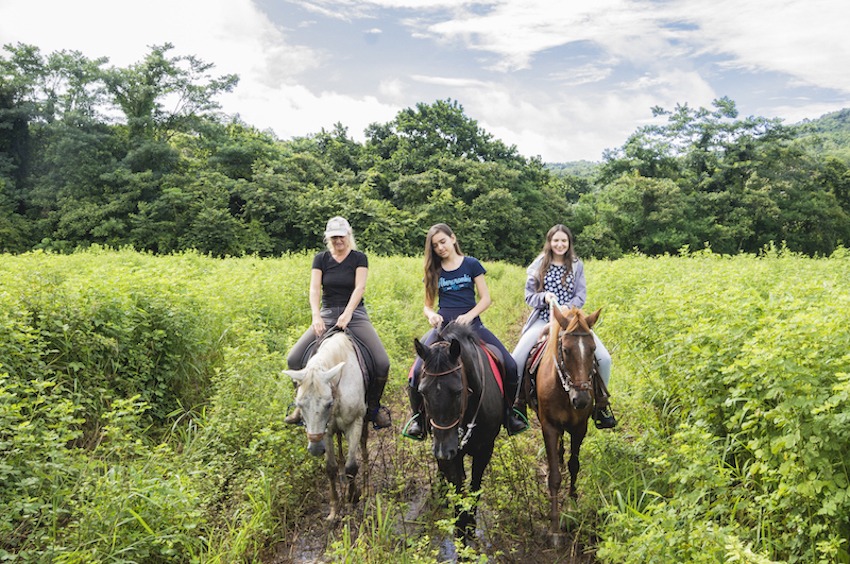 When people think of the Azuero peninsula, they usually only think of the provinces of Los Santos and Herrera. But there are also fascinating destinations on its west side in Veraguas. To get to Torio you must enter by Atalaya that is just before Santiago, capital of Veraguas, going from Panama City. Atalaya is famous for having the largest procession in Panama with more than 200 thousand pilgrims who will visit the Nazarene Jesus of Atalaya.

You continue along that route as if you were going to Mariato, which is the southernmost that I had reached in the area when I went to visit the Finca Coco Mambo of pitahaya or dragon fruit. The road is in poor condition (although they are going to fix it) but we went in a sedan car without problems.

We arrived at Torio at night to meet Melissa from Amazilia Life. We were already hungry so we went to have dinner at Palati Fini Torio, a restaurant run by an Italian couple. Among pizzas and pasta she tells me about the place and gives me an agenda of activities.

It is certainly a destination for nature lovers and surfers. She asked me if I wanted to take surf lessons but I preferred to take a kayak ride through the mangroves in Russia.

What to do in Torio?

The next morning we met at the Plaza de Torio which is like the center of the town. We walked a few minutes to two horse ranches that work together. Melissa Carson has El Vendaval and Katia Rondot has Happy Ranch. We were able to bathe and brush the horses while they saddled ours.

Torio is a real estate project with more than 600 hectares that is owned by three Norwegians. The trails you travel are part of it. We started our jungle tour arriving at a river that was one of many that we had to cross. Sometimes the water reached the belly of the horses.

We went with Katia and her daughter, Stella, who are French and lived in Saint-Tropez before moving to Panama. They came to stay in eco-lodge called Camino del Sol that belongs to another Frenchman from Saint Tropez and they fell in love with the area. As the hotel was expensive they decided to move to Ludwig’s cabins and ended up buying a property in his project. Before buying the property, they had already bought horses. In total we rode about two hours in many areas which were good to gallop, especially on the beach of Torio. Katia says she doesn’t like to take people to the beach unless they know how to ride. “Panama is a country of freedom, that horses can run on the beach is an image of freedom,” she says.

Then we met Fernanda Weinstein and Or Kafler who would be our guides on the new hiking trail in Torio. We would be guinea pigs since no one, apart from them, had gone down the path. When we went Or had plates that he put with a hammer that marked the way. It was not a difficult path but it had rained a lot, so the humidity and mud were at their peak. For not paying attention I slipped and ended up with a buttock full of mud that was impossible to get out of my jeans.

It is worth getting to the waterfall to take a dip after an hour walking.

If you are lazy to do the trail there is also a direct access from the street but you will miss all the biodiversity of the area, including a lot of fungi and flowers.

Obviously after so much exercise we were already hungry, so we went back to Torio Plaza. Katie’s kitchen is run by Katie Thurgood who used to be the chef at the Isla Secas resort. She preferred a quieter lifestyle so she moved to Torio and opened a restaurant that serves breakfast and lunch. The menu changes every day so it is impossible to get bored. If you visit, try their chocolate cookies and banana bread.

At night that restaurant becomes La Chantin Torio which is managed by Melissa’s husband, Jean Carlos Mojica. They serve fusion food with local ingredients. Everything is cooked on the grill, including the most popular dish that is roasted cheese from Atalaya marinated in olive oil with rosemary and is served with cherry tomato and fresh basil.

The basil used in La Chantin comes from Ray’s garden. You can visit this place that has a sign on its front that says “Ray’s Garden”. Ray was born in Guyana but lived almost all his life in Canada, where he had a farm. He moved to Torio with his son three years ago. His son has a hotel called Casa Blanca Hill.

I asked him if he does tours of his garden and he said no, as it was very small, but the space was large enough to sow almost everything. You will find bok choy, spinach, parsley, arugula, kale, mint, basil, white and black eggplant, tomatoes, acid melon and Brazilian grapes. Apart it has trees like lemon, Chinese fruit, avocado, mango and cocoa. Its species vary between native and imported. Some people in the community are go to buy from him. Recently he started having a nursery to sell plants.

Ray is also a provider of Amazilia Life, another Melissa project that began in 2012 as her thesis for the Technological University of Panama. Amazilia is the scientific name of a type of hummingbird that exists in Panama. She wanted a tropical name but that was not so specific to soaps to be able to expand the project in the future. Soaps are made with goat’s milk using ingredients native to Panama. She herself has 10 goats in La Colorada that will be moved to Torio. She produces her own milk, but when there is not enough she purchases from small producers.

Products vary depending on which ingredients are available seasonally. Right now she is making soaps with basil, mint, eucalyptus, cocoa from Bocas del Toro, oatmeal with honey and coconut with citronella. Almost all the ingredients are found in Torio itself. She will start doing tours so that people can go to her farm, milk, play with goats, harvest herbs and make their own soaps. As it is a natural chemical process, you must be a teenager or an adult to have this experience. In Panama City you can find her soaps in the Mercadito Biológico, Urban Market in the City of Knowledge and hotels like Westin and Gamboa. In addition, she makes delivery orders.

Our last stop of the day was at Carlota’s house, which is the freest soul I have ever met. Her mother is from Soná (Veraguas) and her father is Colombian. She met her partner in Bocas del Toro and traveled through Central and South America for four years selling handicrafts and surfing. They started looking for the perfect wave and then found their land. When I asked about the wave, she tells me that it is a “secret spot” that only she, her husband and few friends know. “It is a gift from the universe to be able to surf with few people,” says Carlota.
15 years ago they came to Torio to surf and sow their food. Local people did not buy their handicrafts and there were no tourists. They went to the market in Anton Valley to sell but did not focus on building their house. They started sowing and learned about permaculture and soil creation. The more biodiversity of plants the better, therefore they have edible, medicinal, native and ornamental. She took us around her garden and gave us many plants to sow.

Your house is like a house of elves or fairies. She says that her husband, Roberto was the creator. He studied some art and built it practically without spending money. Since they had land, they decided to dig, and use it for the walls. The house is open but it is impossible to find it unless you know where it is, so there is not much risk of being robbed. The roof is a recycled canvas of a shrimp farm in the area that has a liana with flowers on top that protects it from the sun and wind, apart from keeping it cool. The sticks they used are from the area and the beach.

The both live with their daughter in a very natural way, meditating every day and eating a vegetarian diet.

As sustenance, the husband makes dream catchers and she does massages. Surfers need massages so she learned while traveling and has more than 10 years doing them. She does holistic massage, which is the fusion of four techniques including reflexology, which works the whole body from feet and hands; shiatsu with pressure points on the meridians that are channels of energy that regulate body fluid; sensitive massage that balances emotions and tantric massage that works on the chakras, glands and lymphatic system. You can do them at her home or in Torio, like in hotels or in a multi-use room.

Despite being such a small town, Torio has attracted local and international people. It has an incredible vibe that allows the visitor to connect completely with nature. If you visit you can also cross to Cebaco Island or go to Malena or Mata Oscura to see the nesting turtles and the release of the neonates.