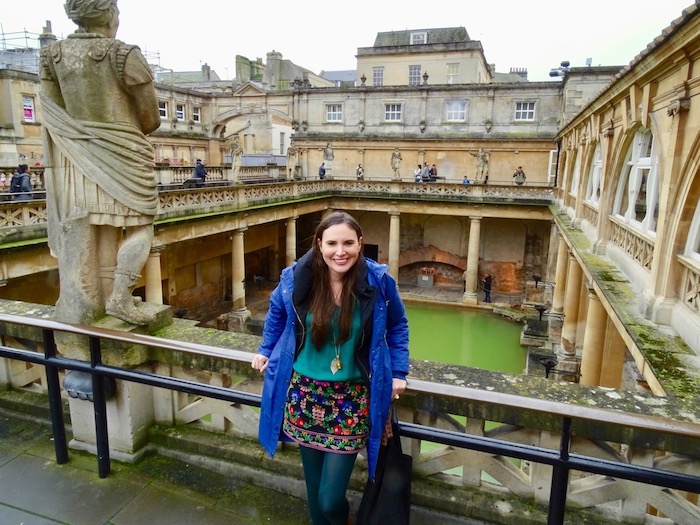 The Roman Baths of Bath are strong proof that the Romans knew how to live! These hot springs are found in the city of Bath, which is part of the county of Somerset in England. They were forgotten for many years, since the ancient Roman bath and temple was built over. More than 100 years ago it was rediscovered by chance and then restored. With more than 2,000 years of history, this site is a UNESCO World Heritage Site.

How to visit the Roman Baths in Bath?

The Roman Baths open every day except December 25 and 26. Opening hours vary according to the season, so it is advisable to check its website before going. It opens at 9:30 a.m. from November to February, while the rest of the year it opens at 9 a.m. The earliest closing time is at 5 p.m. exiting at 6 p.m., but in summer it can close at 9 p.m. exiting at 10 p.m.

Bath is in the west of England, 160 kilometers (100 miles) from London or 16 kilometers (10 miles) from Bristol. You can go on a fast train from Paddington station in London. Waterloo station has slower and cheaper trains. You must get off at the station called “Bath Spa”. Going by bus is another economic option, which is also slower. Those who rent a car in London can arrive in two and a half hours by taking the M5 and M4. It is about 45 minutes from Stonehenge.

It is worth staying in a hotel in Bath or a hotel in Bristol, since both cities are quite attractive. Many travelers choose to go for the day by taking a full day tour from London.

Another option is to take a walking tour that goes to The Roman Baths and around the city of Bath. More than 1.3 million visitors go per year, therefore, it is advisable to buy the ticket online during the high season. To avoid crowds, it is recommended to go early or late in the afternoon. An average visit can take between an hour and a half to two hours. Visitors will receive an audio guide that is available in many languages.

Julius Caesar invaded England in 55 and 54 B.C. as part of his conquest of Gaul. The first expedition was to know the territory, since there were few men and the ships suffered damage caused by a storm. On the second expedition they got the Celtic tribes to pay homage and give hostages in exchange for peace. They left no troops, nor conquered territory, but they managed to establish relations between England and Rome by putting a friendly king in power. The following emperors let the relationship continue, until Caligula who had a failed conquest attempt between 39 or 40 A.D.

Claudius invaded England in 43 A.D. with the help of a fugitive British king. After capturing the south of the island, the Romans set their sights on what is now Wales. During the mandate of Emperor Nero, they reached as far north as Lindum (now known as the City of Lincoln). They crossed the Strait of Menai slaughtering the Druids. Then they defended themselves from a revolution led by Boudica who attacked and destroyed three Roman cities. In the following years they continued conquering territory.

In 117, during the mandate of Hadrian they had another crisis in the north (Scotland). Antoninus Pius change the border, setting up the Antonine Wall in 142, north of the Isthmus of Forth-Clyde where Hadrian’s Wall was built in 120. Although there were several attempts, the Romans never conquered Caledonia (Roman name for what is today Scotland). Attacks by the Saxons, Scoti (Irish) and Attacotti in the fourth century weakened the Roman army. An economic decline in the early fifth century marked the end of Roman time in Britain.

Romans were lovers of baths. Most Roman cities had facilities for bathing. The thermal baths were large-scale imperial bath complexes. While the spas were smaller and could be public or private. They included hot bath, warm bath and cold bath. If there was no natural source of hot water, the water was channeled from a river or aqueduct to be heated before going to the hot bath. Some thermal baths also had steam baths, which would be like modern saunas.

The Roman Baths have water that is naturally hot. It begins as rain falling on the hills of Mendip, going down limestone aquifers using geothermal energy to raise the water temperature between 69 and 96 ° C (156.2 and 204.8 ° F). This causes hot water to rise to the surface.

They usually had separate areas for men and women, although it was possible to have mixed zones. These places were very social. They were not only bathrooms, they also had libraries, restaurants, exercise spaces and spa. Roman culture believed in personal care, so they were very clean. Apart from The Roman Baths, the Ravenglass Roman Bath House also survived in England. In Rome the baths of Caracalla, Diocletian, Titus and Trajan survived, apart from those of Pompeii. In Bulgaria there are Roman baths in Sofia, Serdica and Varna.

These hot springs in Bath were used as a worship center by the Celts. It is believed that they were established by Bladud or Blaiddyd, a legendary king of the British. He was sent to study in Athens, where he contracted leprosy. On his return he was taken prisoner, but he escaped and hid away. He got work taking care of pigs in Swainswick, near what would later be Bath. In the winter his pigs went to a place to bathe in hot mud and these pigs did not suffer from skin diseases like the others. He decided to try to follow their example and saw how his leprosy was cured.

He returned to his father to assume his royal position. Nonetheless, he founded Bath so that other people could benefit from the benefits of hot springs. There is a statue of King Bladud in the Roman Baths of Bath that says it is from 1699, but it is believed to have been made before. He dedicated the hot springs to the goddess Sulis, a name that remained in use when the Romans arrived; who named the town “Aquae Sulis”. They changed the name of the goddess of Sulis to Minerva.

The beginnings of the thermal springs in Roman times date to Emperor Claudius, who used oak stakes to create a foundation and surrounded the spring with stones. In the second century it was locked inside a building with a wooden barrel vault. The complex continued to develop for the next 300 years, when an arched roof was built on the large bath while the temple remained outdoors. The four columns that supported the pediment of Gorgona’s head are displayed in the museum.

The sacred source and a sophisticated drainage system prevented the accumulation of sediments, allowing water to flow through the Baths.

Curses, coins, jewelry and glasses were found and are on display. Curses mostly demanded revenge for injustices. The curse tablets that were written for Sulis Minerva are part of the Unesco Memory of the World Register, whose goal is to preserve documentary heritage throughout the world.

During the Victorian era, a new generation started using the place. Beliefs that the waters had healing properties continued. Therefore, people bathed and drank the water in the King’s and Queen’s Baths. The Queen’s Bath was built in 1576 to extend the facilities and provide cooler waters. It got its name from the visits made by Queen Anne of Denmark in 1613 and 1615.

The water that is drunk comes from a new hole that sank in 1982, therefore it is clean and safe. You can try this water with 43 minerals (which are detailed on a wall) at the end of the tour of the thermal springs. On the tour, one of the girls recommended that we try the water, but gave us the warning that it didn’t taste good. She was right! It is quite unpleasant and hot, but you should probably try it to see if you tolerate it, as it has medicinal benefits.

The Pump Room is next to The Roman Baths. It was built in 1706 to separate the upper class from the lower. The rich drank water in a beautiful marble fountain with fish.

Today it is a restaurant that has had live music since 1706. Major Charles Davis, the city surveyor and architect, was worried about a leak in the King’s Bath. In the repair he discovered Roman mosaics, pottery and lead. Excavations began in 1878, continuing in the 1900s finding most of The Roman Baths. They bought the buildings and in 1885 the Queen’s Bath was demolished, discovering a Roman Bath in a circular shape.

The Roman Baths were opened to the public in 1883. In 1895 the temple and part of the sacrificial altar were discovered. The Spa opened in the Victorian era and was used by more than 100,000 people in 1890. A variety of treatments were supposed to cure all ills. This spa closed in 1976, but it is possible to bathe in other hot springs in Bath.

Edinburgh Castle, the defender of Scotland

Stonehenge is Still an Enigma