With 2,759 rooms, Symphony of the Seas is the largest cruise ship in the world. This 1,188-foot long mega-ship has a capacity for 6,680 people. And on the inaugural trip I was one of them. After completing a season in Europe, Royal Caribbean brought its new toy to play in the waters of the Caribbean.

As usual, on the first trip they invite journalists and people from the tourism industry. Grand Tours invited me as part of the Panamanian delegation. We were a large group of 24 people but small compared to other major markets.

Symphony of the Seas departs from the new Royal Caribbean Port in Miami. We went straight from the airport to the cruise but it is advisable to sleep the night before in a hotel en  Miami. Previously I had only gone on two cruises, the quinceañeras and one that leaves Panama with my family. It is not my favorite way to travel because I feel that you spend little time in the destinations, but it intrigued me and I wanted to give this way of traveling another chance.

Such a large cruise is like a building on the water. Really you notice the quantity of passengers when boarding and disembarking you must wait in long lines that move fast. Once inside the cruise there are so many things to see, eat and do, that you do not see the thousands of people who accompany you.

It is advisable to check-in before arriving, something similar to airplanes. In the port check-in room they had cookies and bottles of water that we took to calm our hunger. Finally we entered the ship in search of our room. When you ride the elevator on the floor they put the day of the week, in case you forget.

We were on the 11th floor which for my luck was where Wonderland restaurant was located. The theme was Alice in Wonderland (one of my favorite movies as a child) with delicious creations. They were giving samples when we entered and of course, I had to stop to take some. They were accompanied with a cotton candy drink that dissolved into a pink mixture when alcohol was served. After the delicious meal, I decided that maybe I liked cruises.

When you board you have time to go to your room and eat lunch. At 4 p.m. an alarm goes off meaning the emergency drill has started, which is mandatory on all cruises.

We had finally complied with safety regulations and were free to explore the ship. They hosted a cocktail for journalists that we followed with one of the many shows. The best thing about the boat is the entertainment. The first night I saw a play called ‘Flight … Dare to Dream’ about the aviation industry and the second night I saw ‘Hairspray’. It has no additional cost and they compete with Broadway in quality of actors, stages and first-class effects.

We spent two nights aboard Symphony of the Seas. The first one we were invited to dinner at Chops Grille, which together with Wonderland, are “special” restaurants and have an additional cost. The dinner was incredible.

The second night we went to Jamie’s Italian from the famous chef Jamie Oliver but it was not that good. The Windjammer dining room on the pool floor has a gigantic buffet breakfast and it is obvious that some passengers only go to the cruise ships to eat.

If you like adrenaline you can slide on a dry slide or in three water slides. “Ultimate Abyss” is the dry one that goes down 10 stories. While we asked for wings at Playmakers sports bar I decided to go up and go down to the restaurant on the slide. I put my cell phone in my pocket and went down, to my surprise it came out just at the end. With great sorrow I had to tell the coordinator and she called so that they would not let more people down and she went in looking for it.

The water slides are in the pool and always have a small line. There are several jacuzzis in that same area and a pool to surf.

In your room they leave daily itineraries that tell you all the activities to do on board for you to choose. One of the areas that I liked most was ‘Central Park’ a replica of the famous New York park in the middle of Symphony of the Seas.

A surprise stop in the Bahamas

Itineraries of Symphony of the Seas vary according to the departure that can go east or west of the Caribbean. Eastern destinations include St. Maarten; San Juan Puerto Rico; St. Thomas and Labadee, Haiti. While the west takes you to Roatan, Honduras; Puerto Costa Maya and Cozumel in Mexico. Both routes can include the Bahamas, which is Royal Caribbean’s favorite destination.

They love the Bahamas so much that they acquired their own island called ‘Perfect Day at CocoCay’ which was the product of thousands of consultations. This island is the perfect day according to clients of Royal Caribbean and it opens in May of 2019. Therefore, they took us to Nassau and of course the group of Panamanians was down to explore.

When we got off the cruise, the first thing we saw was the famous Atlantis Hotel. As we did not have much time, we decided to hire a driver to take us to the key points of the island.

First we went to eat rum cake at a small store that specializes in these sweets. They are typical of the Bahamas and have different flavors including traditional, pineapple and amaretto.

Then we went to Atlantis but we could not enter the aquarium or the park since we were not guests nor did we have a day pass, so we saw more the casino and the giant glass statues.

I told the driver that I wanted to try the local beer and he stopped us at a store to buy Kalik. Keep in mind that everything in the Bahamas is expensive so you don’t get scared with prices.

Then we went to a public beach called Cabagge Beach that had white sand and a Caribbean sea of different shades of blue and turquoise. I took the opportunity to refresh myself from the heat.

The rest of the tour was forts; Fort Montagu was tiny and when they wanted to charge us for entering we said no.

Fort Fincastle was bigger and has the best view of the island. We went down a tropical passage called “Queen Staircase” to find our bus on the other side.

We continued to see the “pink house” of the governor and then they left us on the main avenue of Nassau.

This area is where cruises go down and is full of shops and bars, including Señor Frogs and Fat Tuesday.

The Royal Caribbean CEO, Richard D. Fain accompanied us on board. He held a press conference for journalists to ask him questions. He told us that Symphony of the Seas was the fourth boat in the Oasis category and that it is focused on providing “the best family vacations” so that people are happy. It is certainly an easy vacation for families without having to worry about anything once on board. 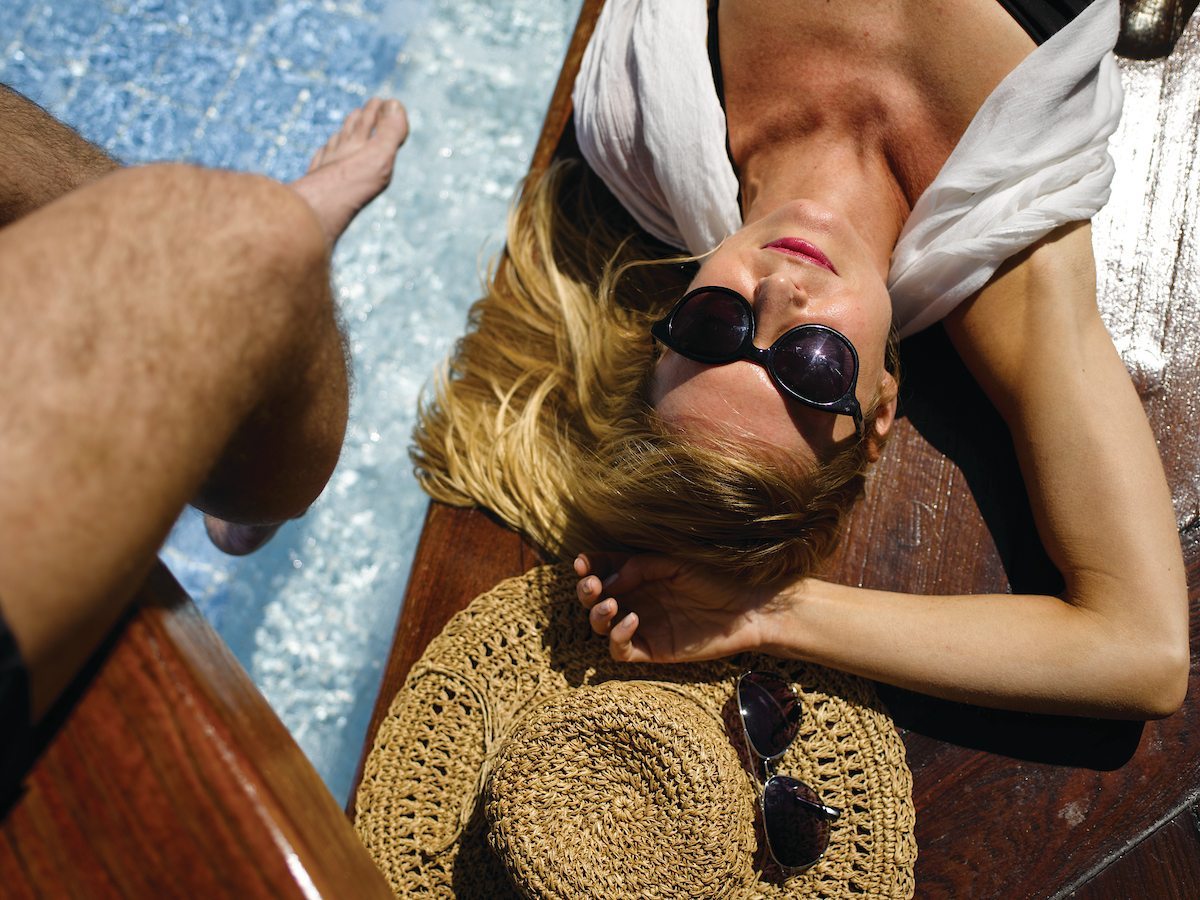 Sail in luxury aboard Silversea Cruises and Expeditions