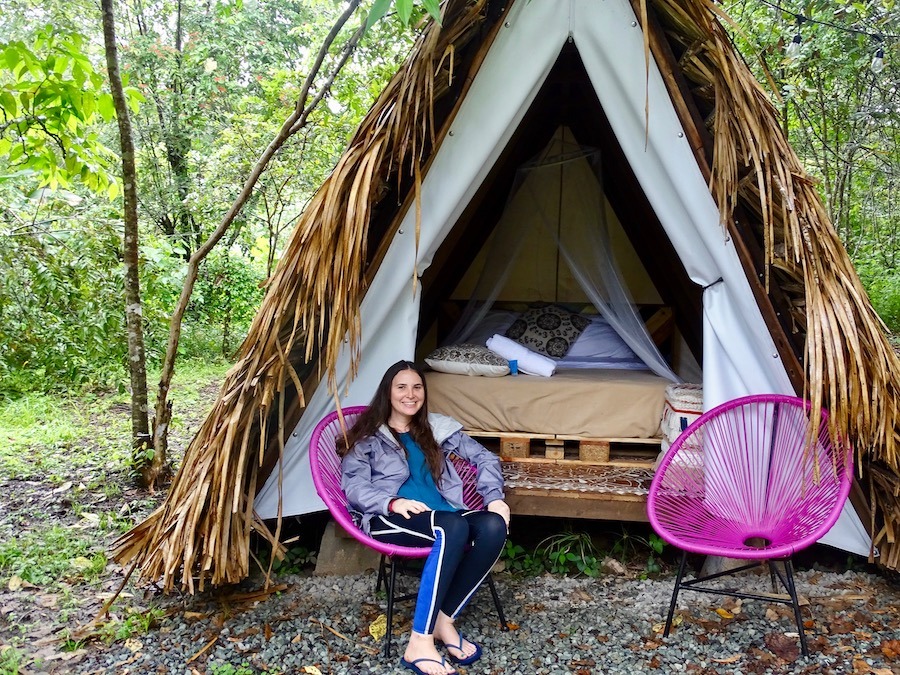 Selina, the chain of hostels, invited me on a press trip to visit their new hostel in Kalu Yala. It was my first time visiting this place, although I have known founder Jimmy Stice since he moved to Panama in 2007. Our small group included people I already knew as Sapir Eyal (yoga instructor), Maricarmen Anguizola (masseuse) and Argimiro Armuelles (chef). We all met in the Selina of Casco Viejo to depart by bus to San Miguel which took a little more than an hour.

It was the first time our driver went too and he used Waze to find the location. After the store we arrived at a part where the road became very bad, but he had understood that it was only a small part. We continued persisting despite the fact that the bus was quite low, passing through rather precarious places, in ups and downs. A hill resulted impossible for the poor bus that started throwing smoke and the smell of its burnt tires. Finally, the driver decided to turn around. In the area there is no cell phone signal and I remembered that there was “Internet for Everyone” in the school by the store. While I was trying to connect the man in the store told the driver that there was another place to leave the car. It seems that he had to put in Waze “Selina Kalu Yala Base Camp”.

Upon arrival they were worried about us since they did not think we were going to try to climb, which took us about 40 minutes. They all mounted us in a 4×4 pick-up with snorkel. In the end we had to cross a river and laughed at the thought that it would never be possible for the bus. Your reward after this journey is a sustainable community of about 230 hectares.

A native of the United States, Jimmy decided to move to Panama as he considered it a more exciting place than his native country. He arrived in the big real estate boom and spent 12 months touring the country with real estate agents. Americans had already bought the beach areas, so it wasn’t what I was looking for. I knew I wanted something less than two hours from her capital city. He went to Altos de Pacora Park and met a park ranger named Pedro Rojas while drinking a Coca Cola in a Chinese shop. He told him about a valley that is about an hour from the city but was completely unknown. This valley would end up being the chosen property.

His family develops real estate which is one of the most polluting industries. Jimmy wanted to do a project that was not, by improving socio-economic and environmental conditions. The name Kalu Yala comes from the local indigenous Kuna language that seemed prettier than Spanish and English. ‘Kalu’ means a spiritual place, a sacred room or where souls are born and ‘Yala’ is a town. Depending on what Kuna you ask and how old he is, he can give you a different answer from what Kalu Yala means.

There are three pillars of the community: institute, construction and hospitality. The institute was created eight years ago to bring students for three semesters a year: spring, summer or fall. Courses last 10 weeks and you can learn biology, construction, agriculture, entrepreneurship, education, rural medicine, cooking, hospitality, media, engineering and business. As they had students, they had to make temporary structures to sleep in hammocks and awnings. Then other people began to show interest in going but for shorter times.

Bodhi hostel opened in March, 2018, then three more hostels were interested in Kalu Yala. Via Vento, which is in Morillo and Santa Catalina, Lost and Found Hostel and Selina that opens completely in December. The idea was to be able to experience nature without having to move to the jungle. Hospitality has an important role in conservation and biology. Those who visit can take the courses free of charge from Monday to Friday at 9 a.m. and 3 p.m. since the weekends are for rest and parties.

On site live about 35 people who are curious to interact with them and learn how they came to live in the middle of nowhere. Annoying I asked Jimmy that if he had formed his own cult and laughingly he said no, that he was a libertarian and that he had no centralized power.

Kalu Yala has a restaurant that prepares delicious meals. Chef Nick is Argentine but lived most of his life in Toronto, Canada. His last job before Kalu Yala was running a restaurant for three years that sat 1,200 people. He tells me that he had no life and that he needed a change, so he ended up in the jungle after trying his luck in Argentina. They also have a bar that has special happy hour promotions every day. Although there is no cell phone signal, there is Internet that comes and goes according to the weather.

What to do in Kalu Yala?

Next to the reception you will find a tour operator called Tres Brazos Outfiters that is managed by Tyler. It has a sign with all the trails available next to their level of difficulty. Every day there is a list of activities that usually includes yoga, hiking and a night tour. For the night tour it is advisable to carry a flashlight, but you can use the cell phone light. Ryan, a biologist, takes you on this tour where you can see species that do not come out during the day including snakes, frogs, owls and bats.

If you are interested in learning about permaculture you can take a tour with Zoe who is the farm director. They grow food organically for self-sufficiency. Kalu Yala is in the middle of two rivers, Pacora and Iguana. We went on a path to reach the ‘Ramon’s Pool’ on the Iguana River. We took a dip that was quite refreshing and when I got out I felt like 10 years younger.

Tara and Sasha are a couple that met in Kalu Yala. They have a project to distill alcohol. Sasha gave us an explanation of what they do, he says that fermenting alcohol is very similar to making wine. They use a mixture of molasses, yeast and water that is mixed in fermentation tanks. In this process, the oxygen is removed from the yeast, which causes the yeast to multiply. Without oxygen, milk acid and carbon dioxide are produced, which produces ethanol and methane. Methane is used by the biologist to make biofuel with vegetable oil. Only the liquid that remains above is removed and the yeast is left below. What is left over is diluted in water and used as fertilizer. The liquid is heated at low temperature to evaporate the ethanol. It starts with 80% alcohol and then it is lower to 40%. Rum is distilled twice and if you want vodka-style liquor it should be done more times.

They produce rum based on cassava as well, but it is a lot of work since they do not have the equipment yet and they have to peel and mash by hand. The other liquors they make include cinnamon that tastes like Fireball, coffee liqueur and Baileys style but with coconut milk, giving it a tropical touch. Tara grew up in Guatemala so she brought dried Jamaica flower (saril in Panama) and they make another liquor with this flavor. It tastes like juice but has 40% alcohol, making it the most dangerous option. At the moment they only sell there and on the tour, but they want to get permits from the Ministry of Health to be able to sell outside Kalu Yala.

When I was Selina Kalu Yala I was still under construction. We were accommodated in the five teepees that can sleep a single person or a couple. These teepees are very representative of the Selina style with thatched roofs and wood ceilings inside. Each had a jar with light inside that is lit with batteries, apart from a small fan that does not make it overnight. The place is very cool and you really don’t need it. Apart they have two communal rooms that can accommodate 12 and 16 people.

None of the rooms or bedrooms have bathrooms. There is an area with hot showers and another area with toilets and sinks. It is rustic but at the same time very comfortable. The energy is with generators and solar panels, they even have an area to charge electronic equipment.

If you feel tired or stressed, then you might need to disconnect. Sites like Selina Kalu Yala serve to recharge energy and then return well balanced to the real world.

Stay at a Selina Hostel in Panama

Grind cane, milk and ride a horse in Hato Viejo 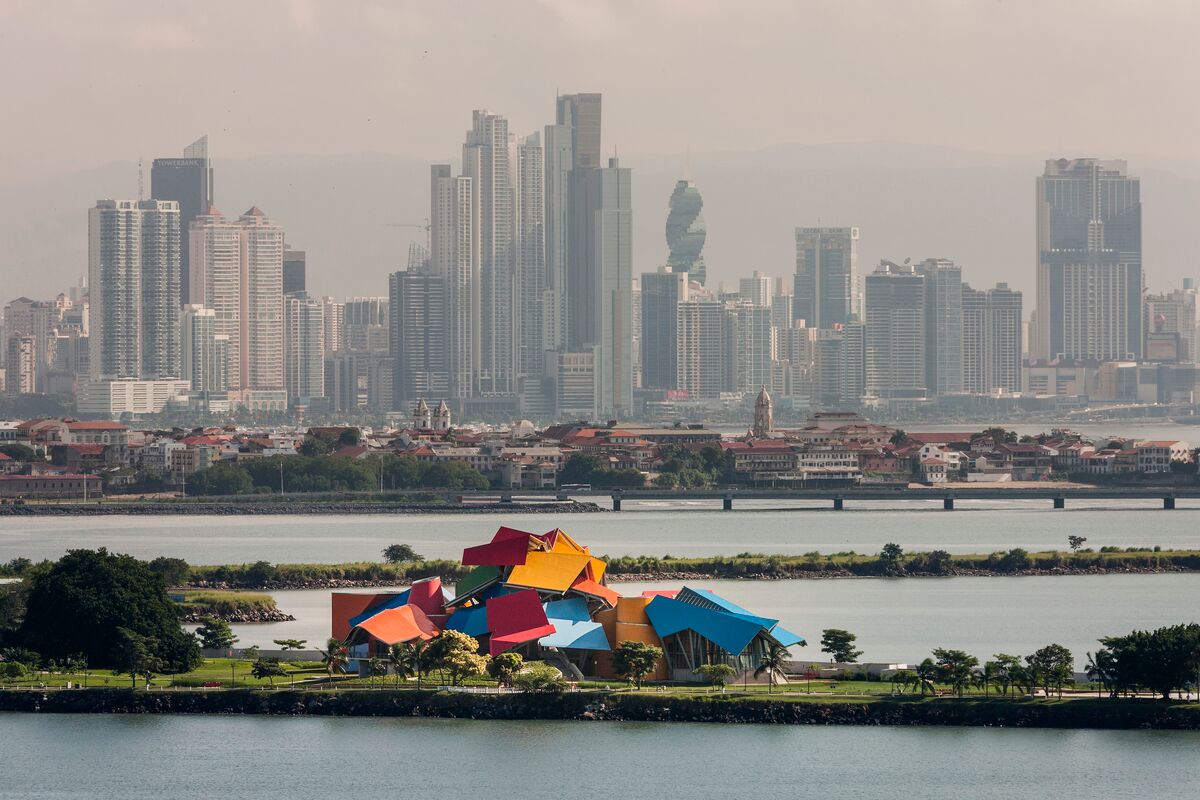 The Biomuseo designed by Frank Gehry is almost ready