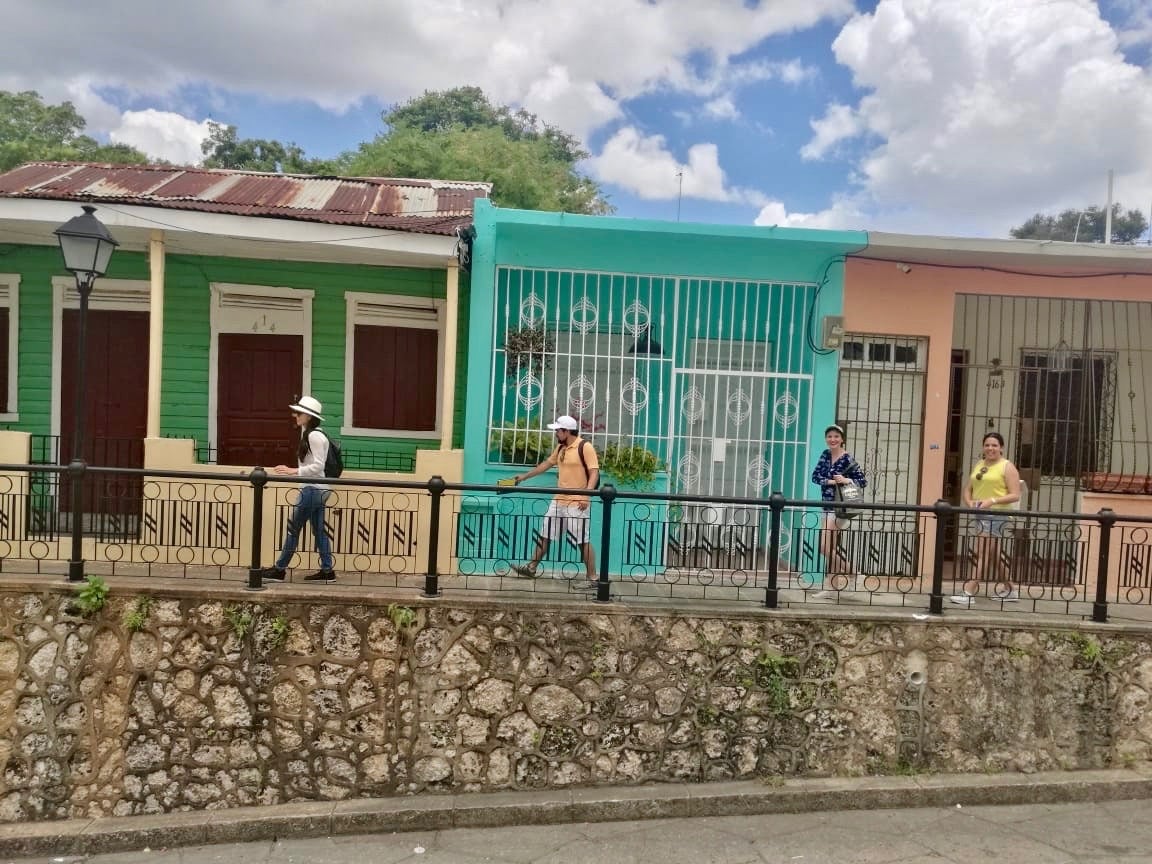 It had been several years since I last visited Santo Domingo, capital of the Dominican Republic. This Caribbean country had always focused on promoting its beautiful beaches and destinations with plenty of all-inclusive resorts. That type of massive tourism is not to my liking, since I prefer more authentic experiences, such as those I received in their capital. 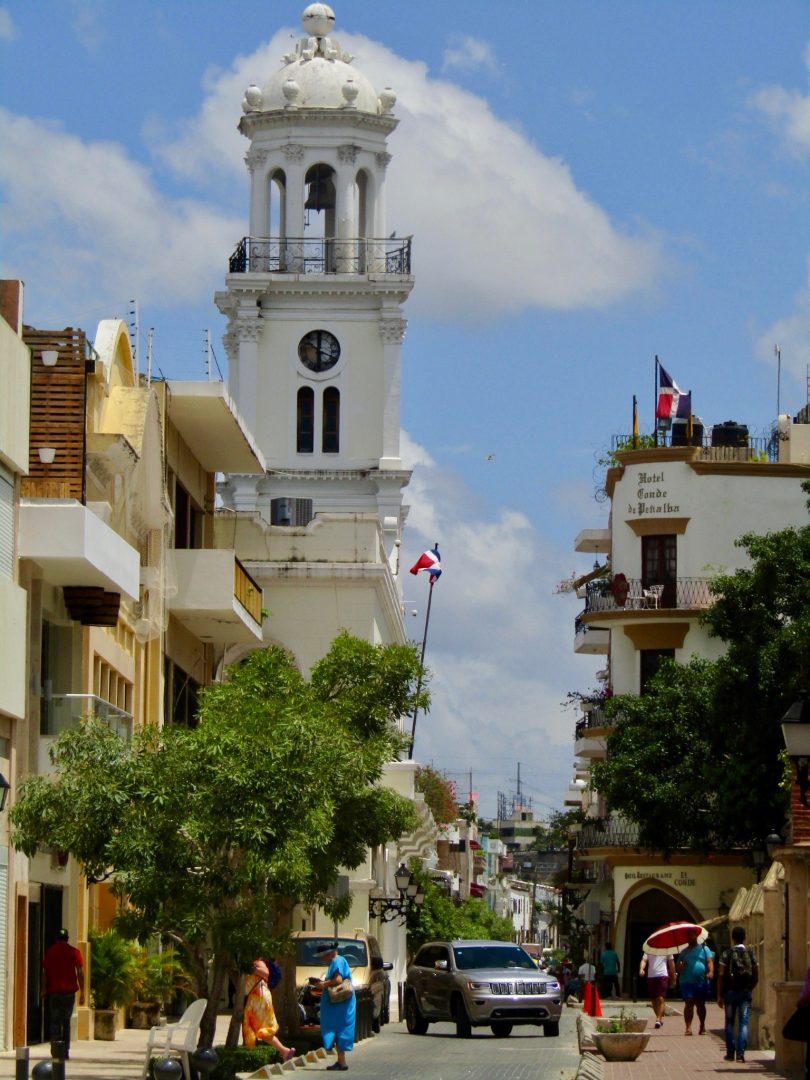 Between one visit and the other, I noticed the change and restoration effort that was taking place in their colonial city, which like ours (Casco Viejo in Panama) had been forgotten. Few tourists went to the capital as there are direct flights to the beaches, but it is worth adding it to your travel itinerary. 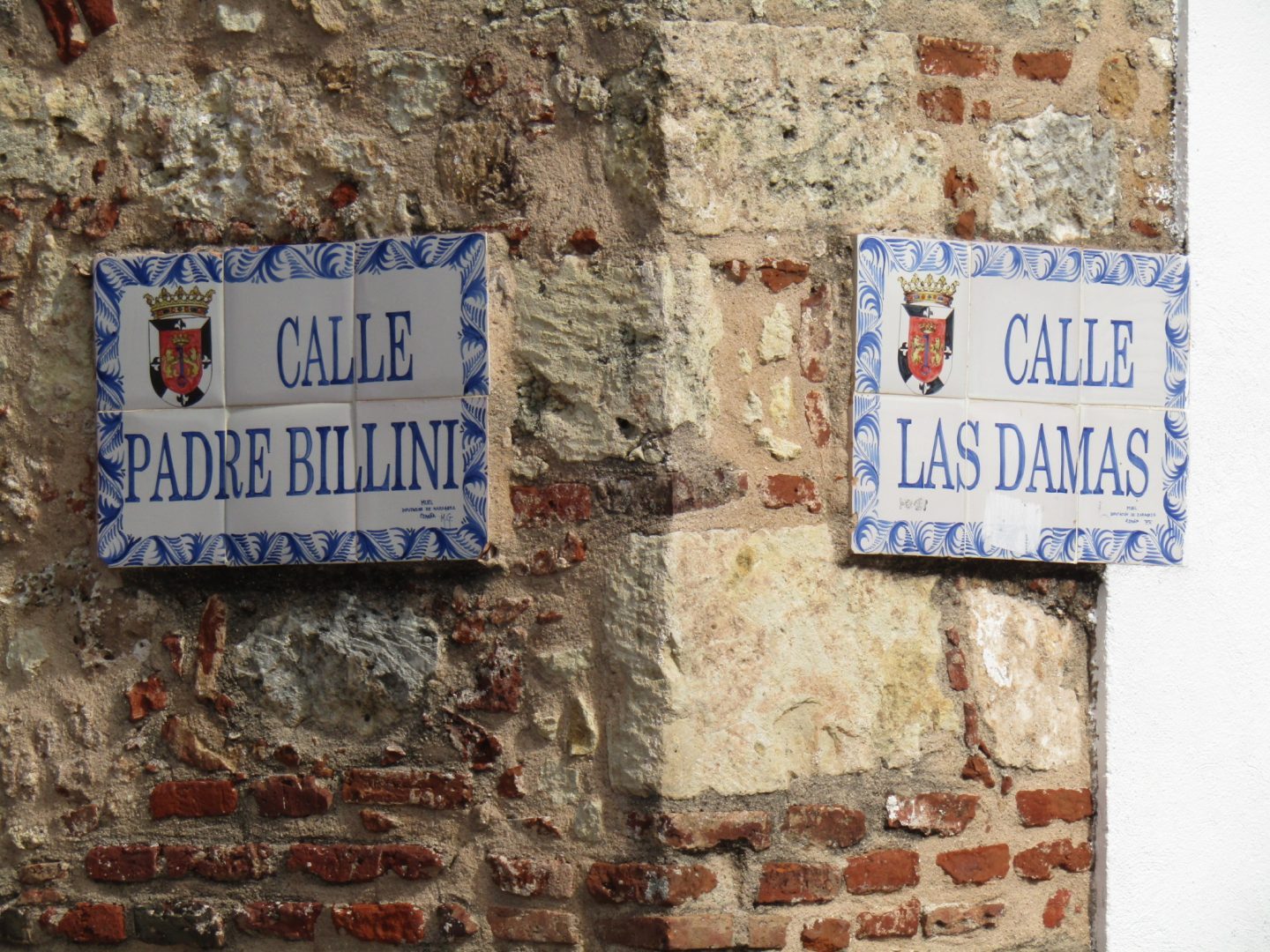 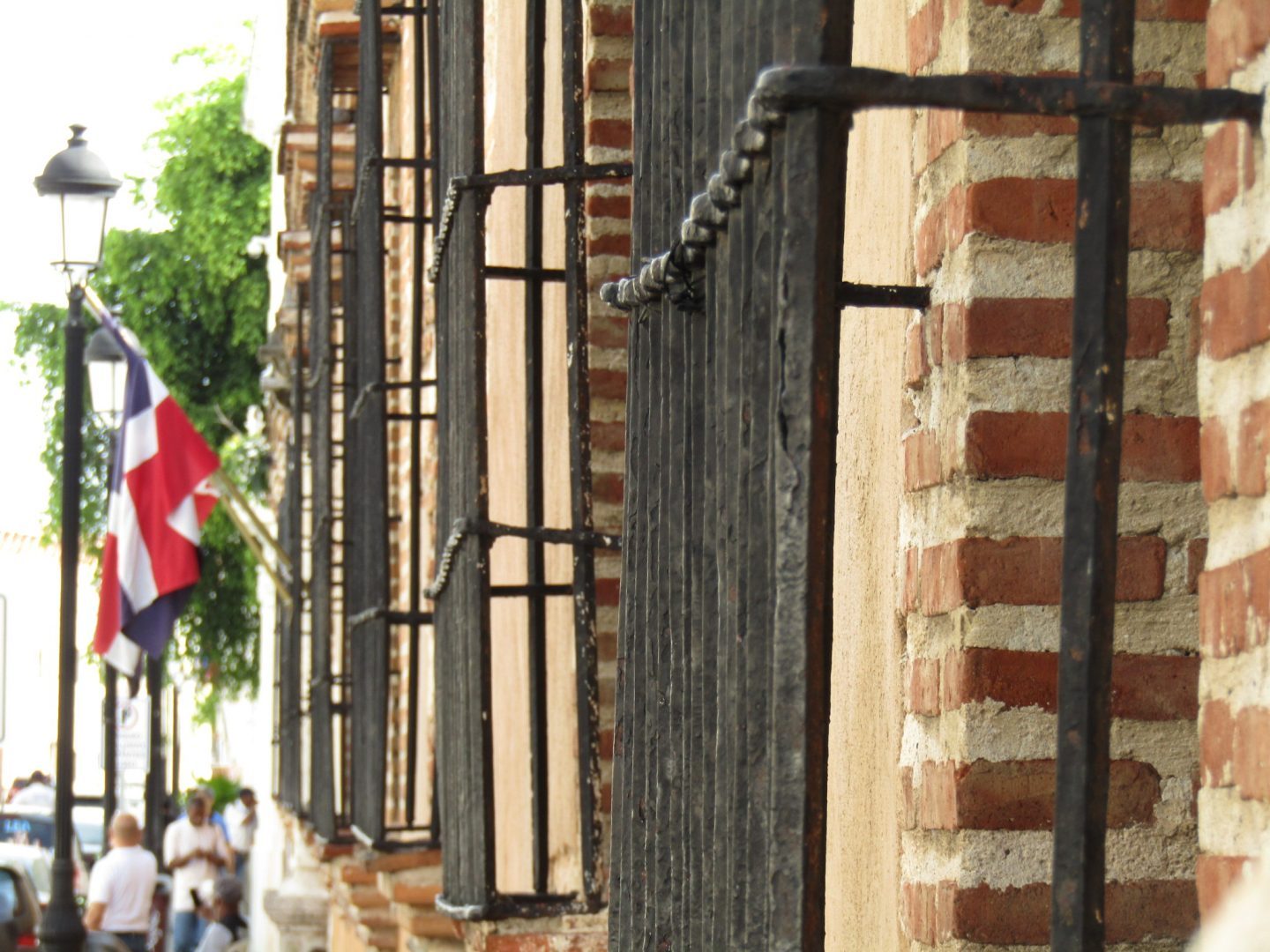 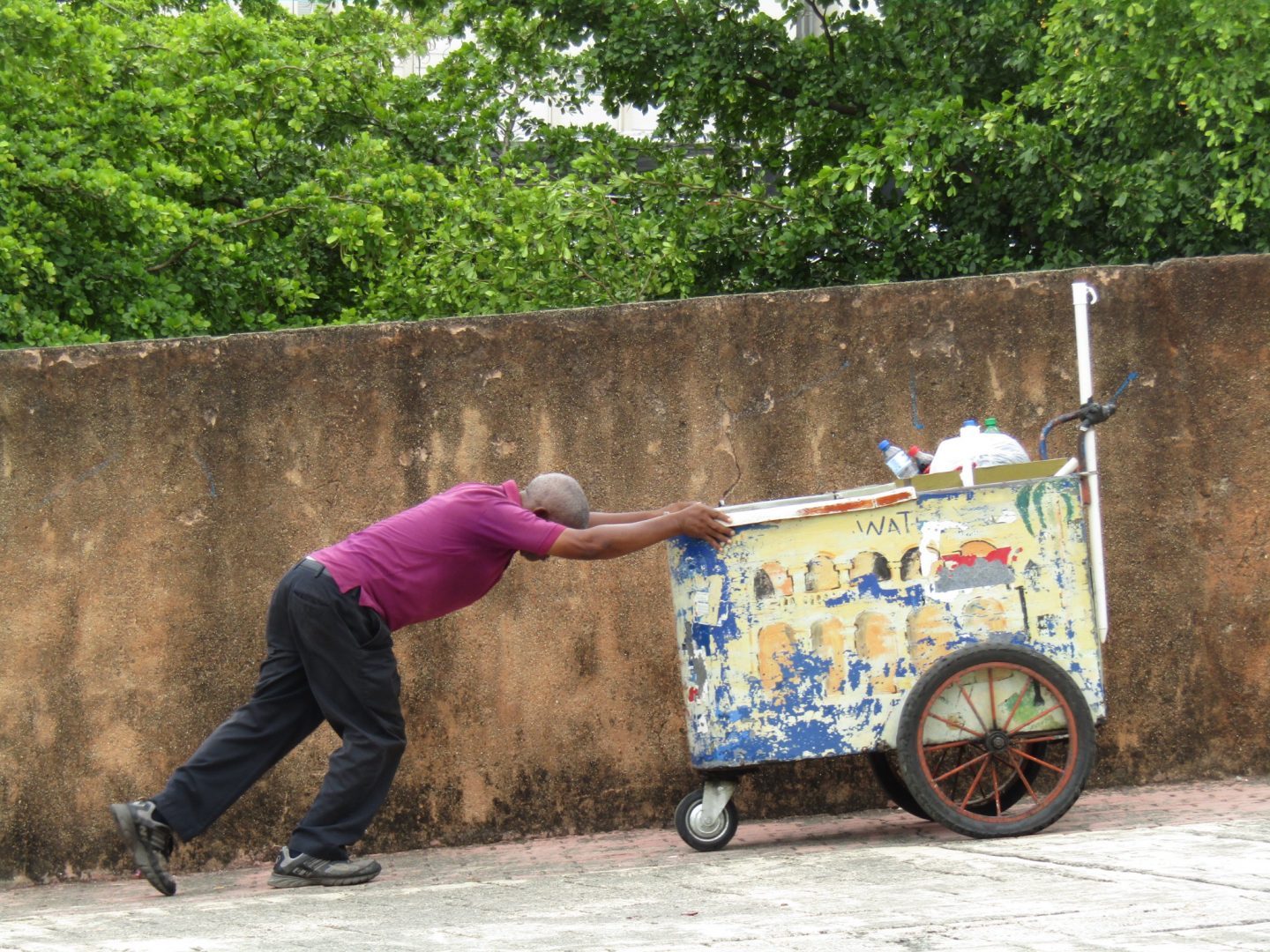 The oldest Colonial City of the Americas

Santo Domingo is the most populated city in the entire Caribbean with a population of 3 million. The city has modern parts with tall buildings that line a boardwalk facing the sea. Although we stayed in beautiful hotels of the Marriott chain in the new part, tourism is concentrated in the colonial part. 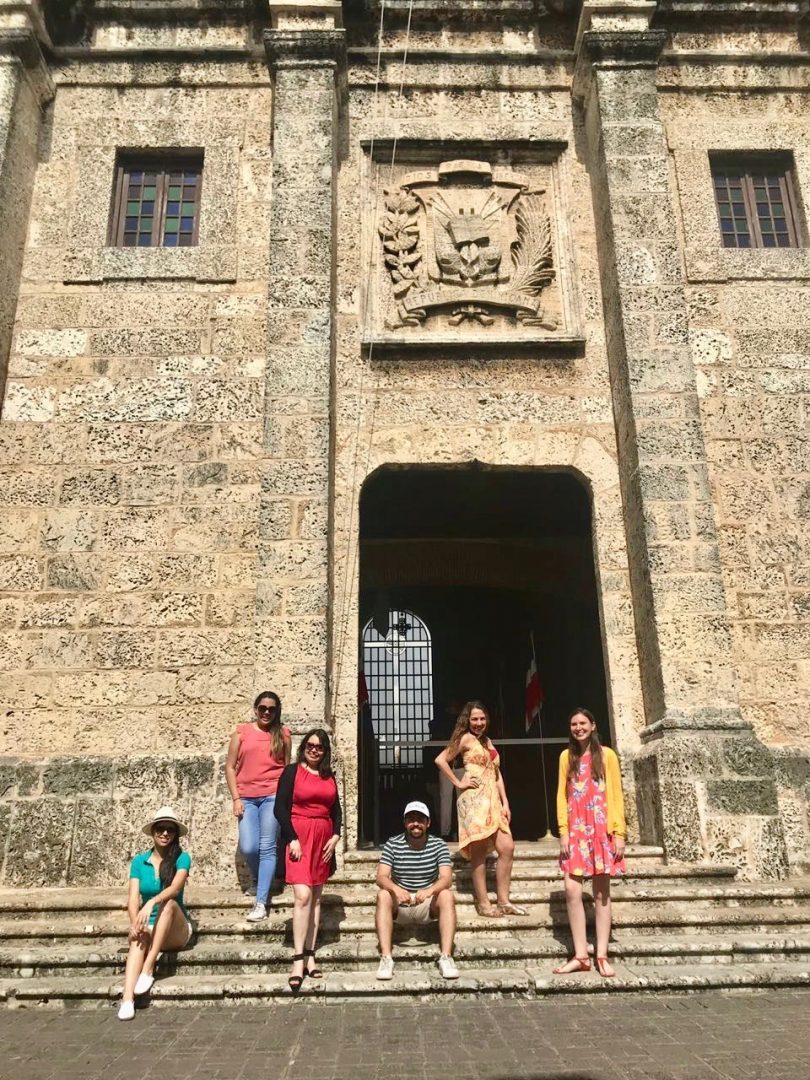 The colonial city of Santo Domingo is a site of Historical Heritage designated by UNESCO. It is popularly known as the ‘Colonial Zone’ and it is easy to reach it since it borders the western part of the Ozama River. 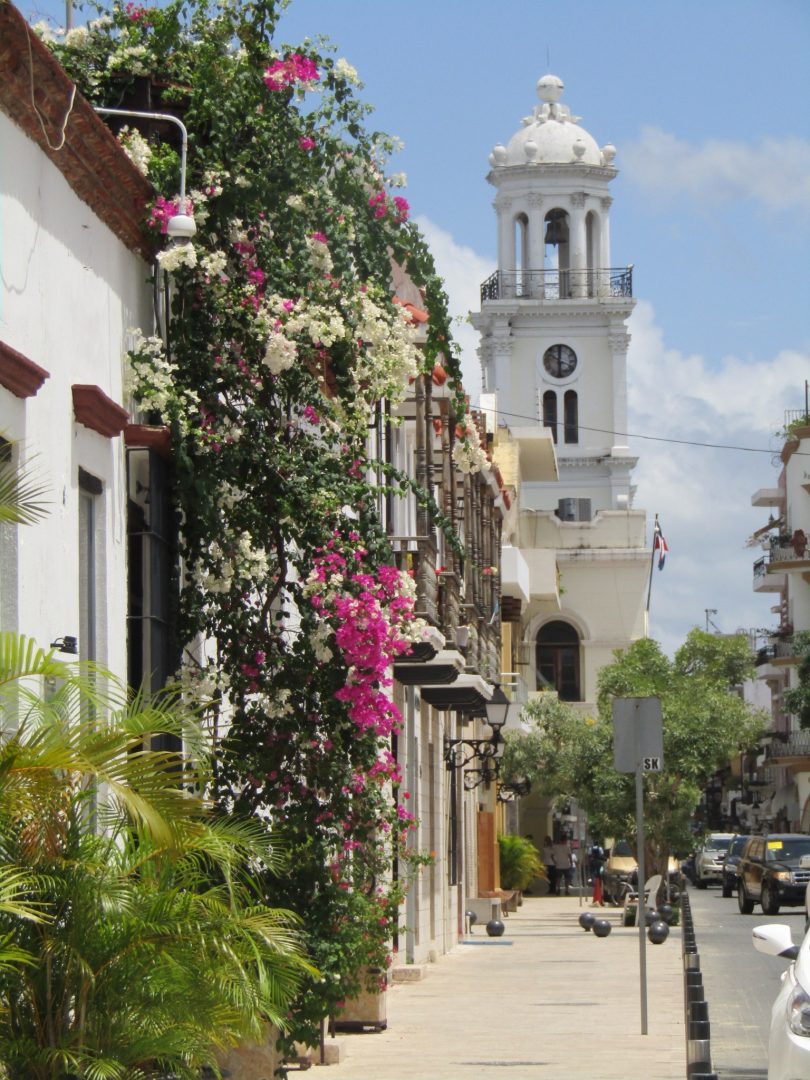 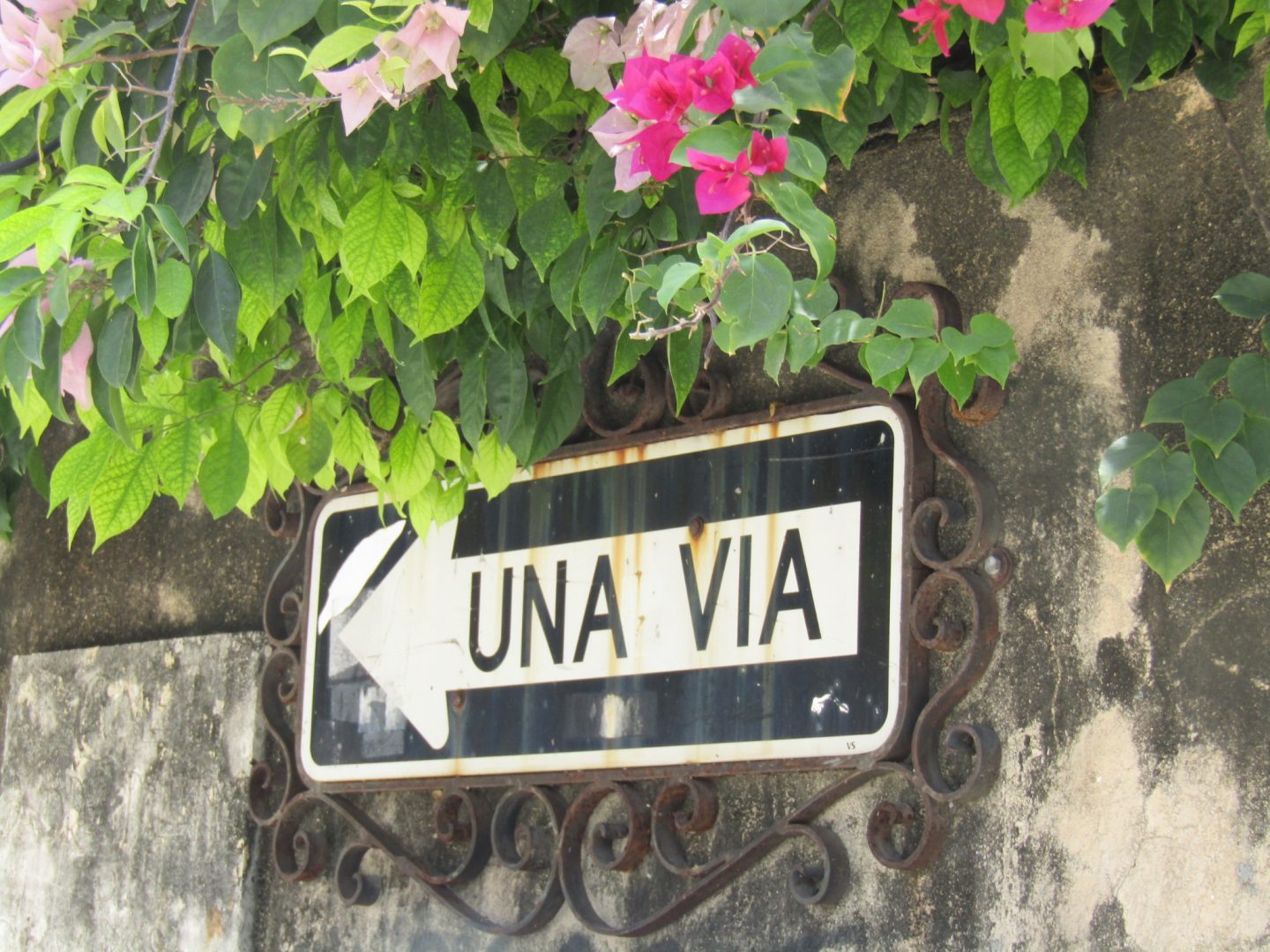 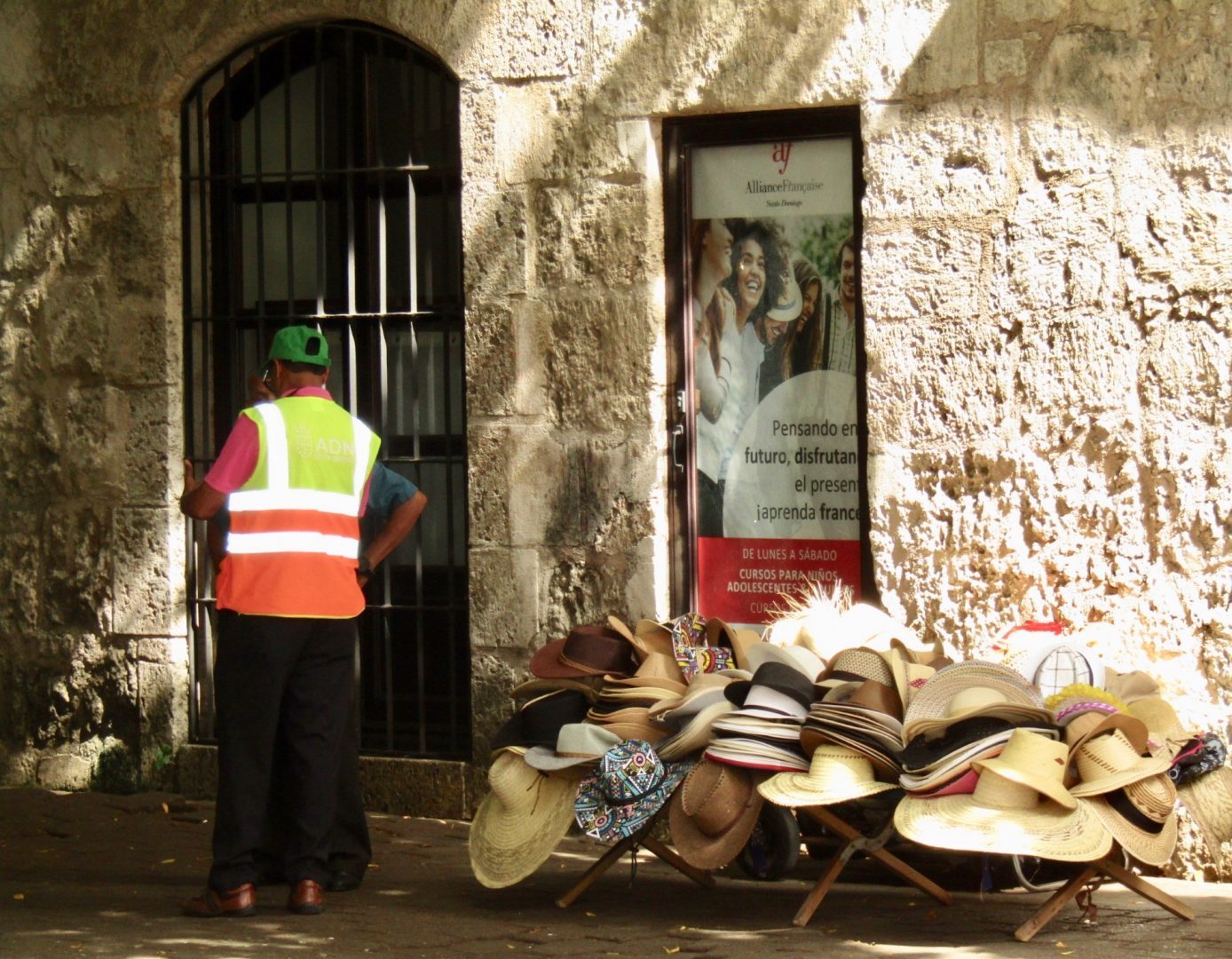 Christopher Columbus arrived on October 12, 1492. In 1493 he began to populate the island that he named ‘La Española’. Bartolomé Colón, Cristóbal’s younger brother, was a cartographer and accompanied his brother on his trips. In 1494 he arrived on the island that currently includes the countries of the Dominican Republic and Haiti. The island had five indigenous cacicazgos when the Spaniards arrived.

In 1496, Bartolomé officially founded the city of Nueva Isabela, in honor of the Queen of Spain Isabel I, becoming the first European city in the Americas. In 1502, the city was devastated by a hurricane and the new governor, Nicolás de Ovando, moved it to the other side of the Ozama River. He decided to change the name to the city of ‘Santo Domingo de Guzmán’, a name that still maintains, except between 1936 and 1961 during the Trujillo dictatorship that was called ‘Ciudad Trujillo’. 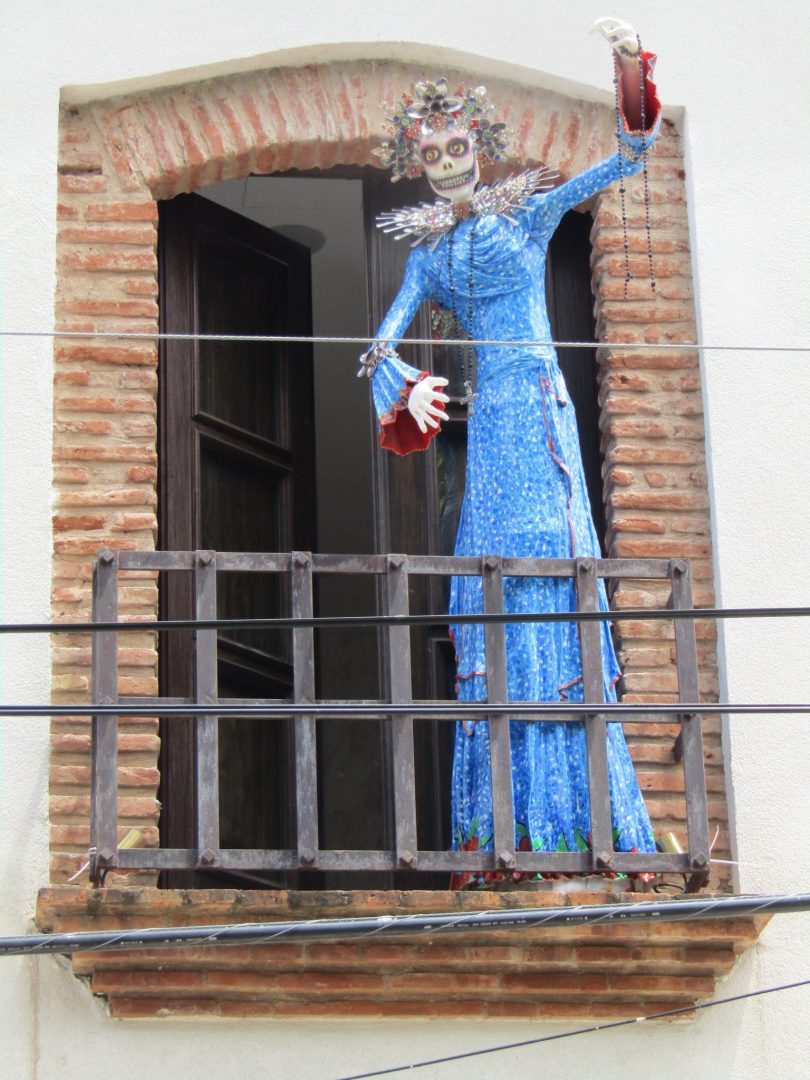 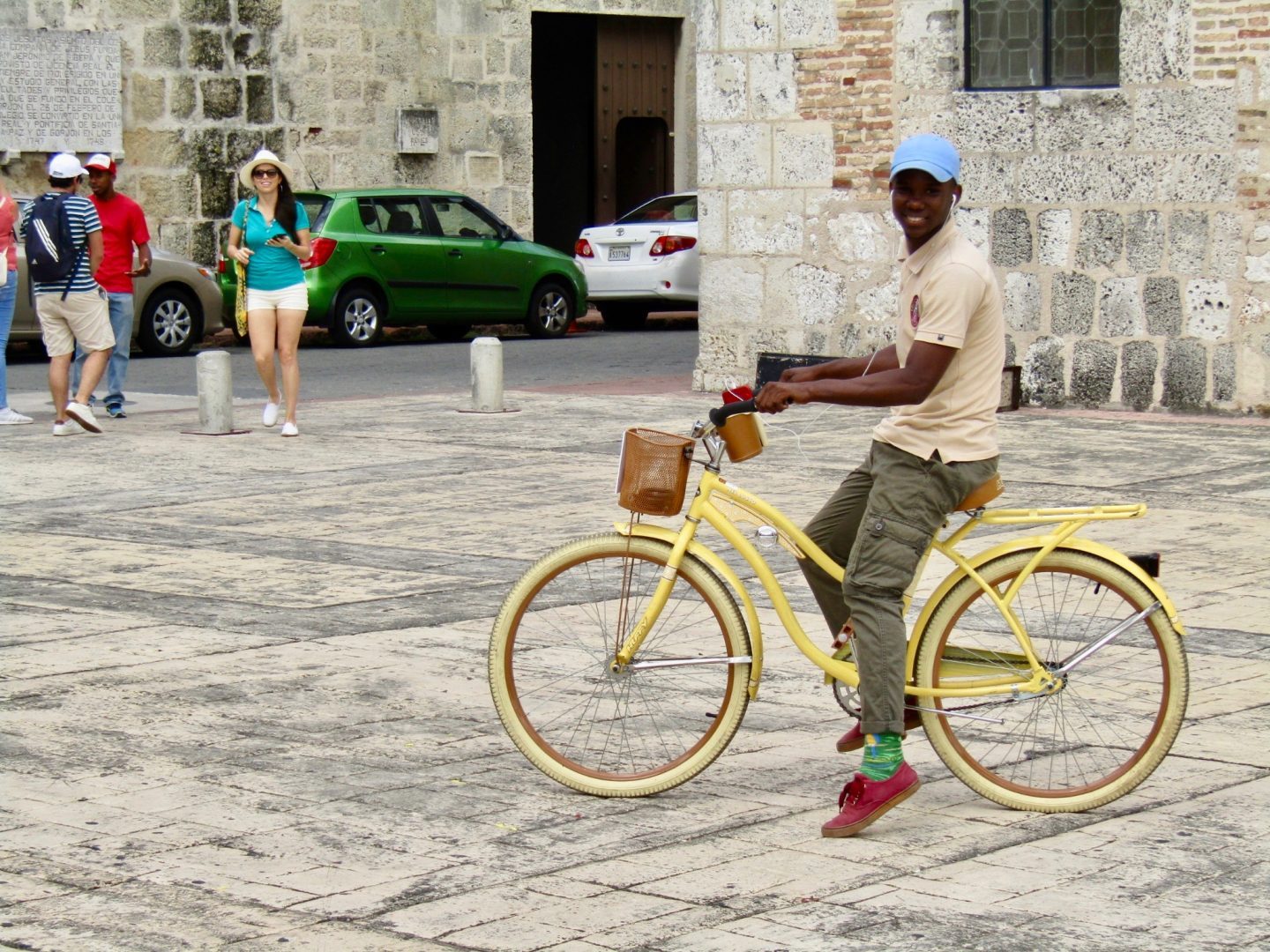 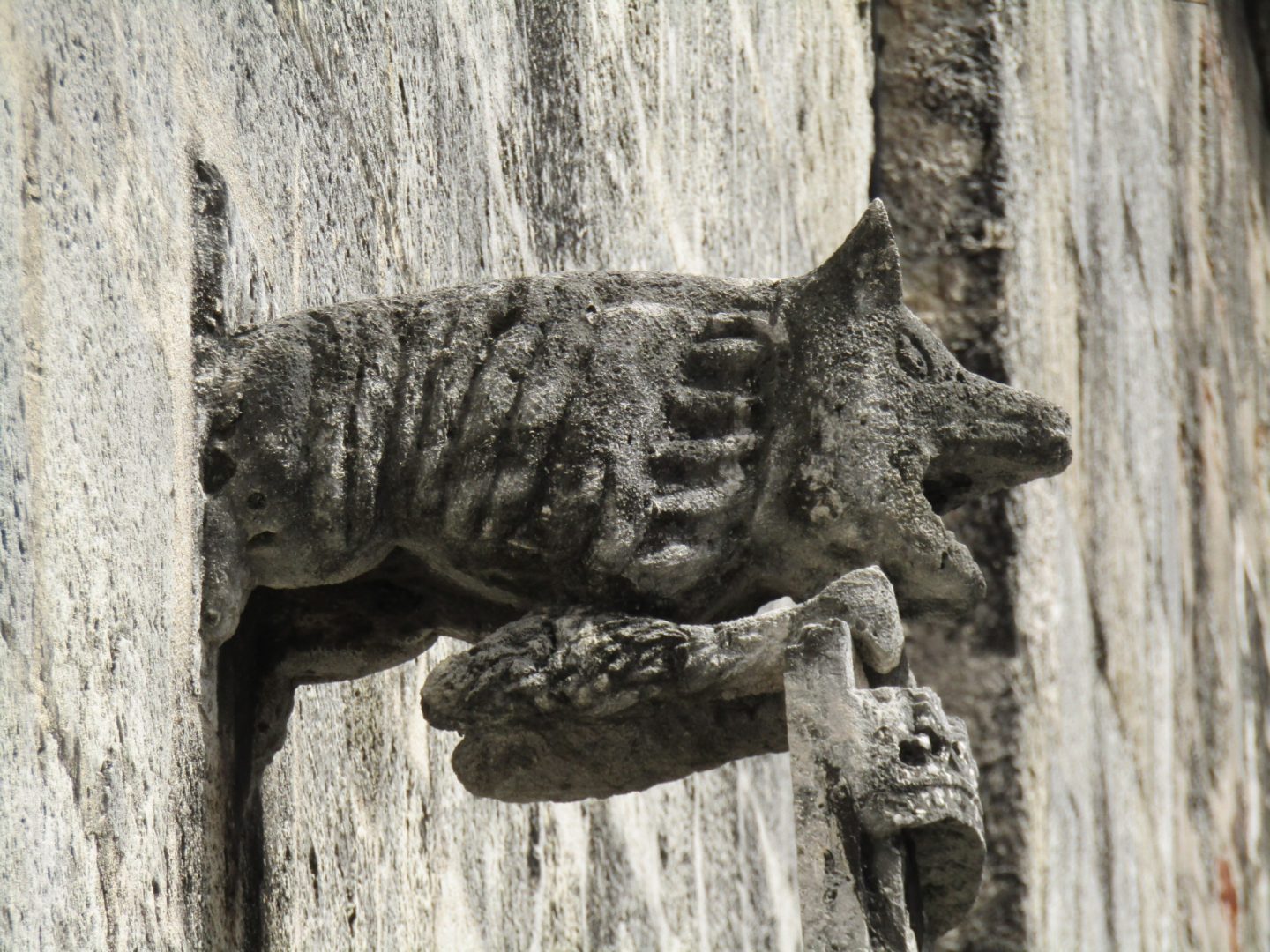 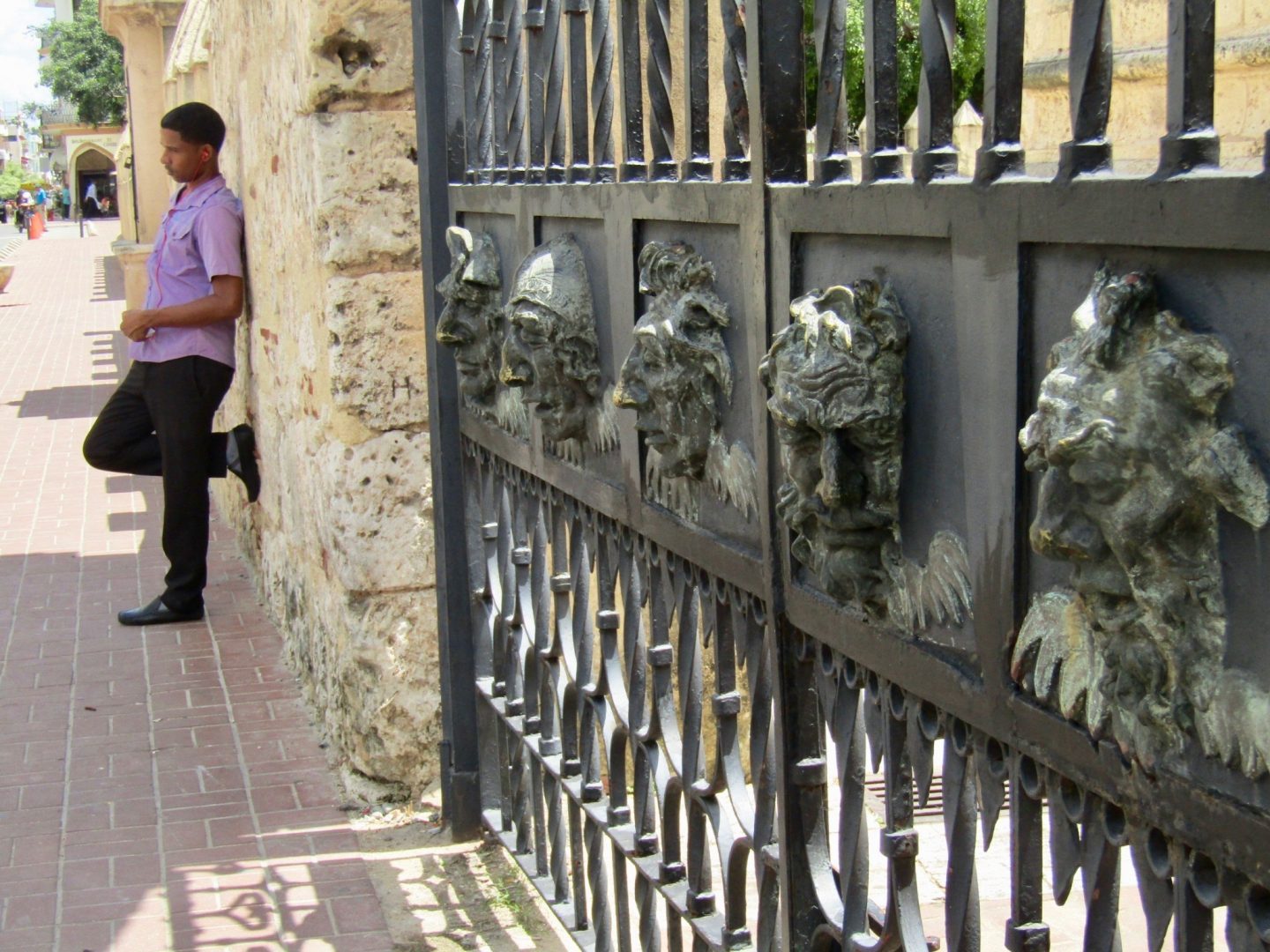 What to see in the colonial zone?

Dominicans are very proud of their history and they will tell you all about their past. Curiously there are busts throughout the capital commemorating those who participated in the development of the country. If you visit and you like history, I recommend hiring a guide to accompany you on your journey. 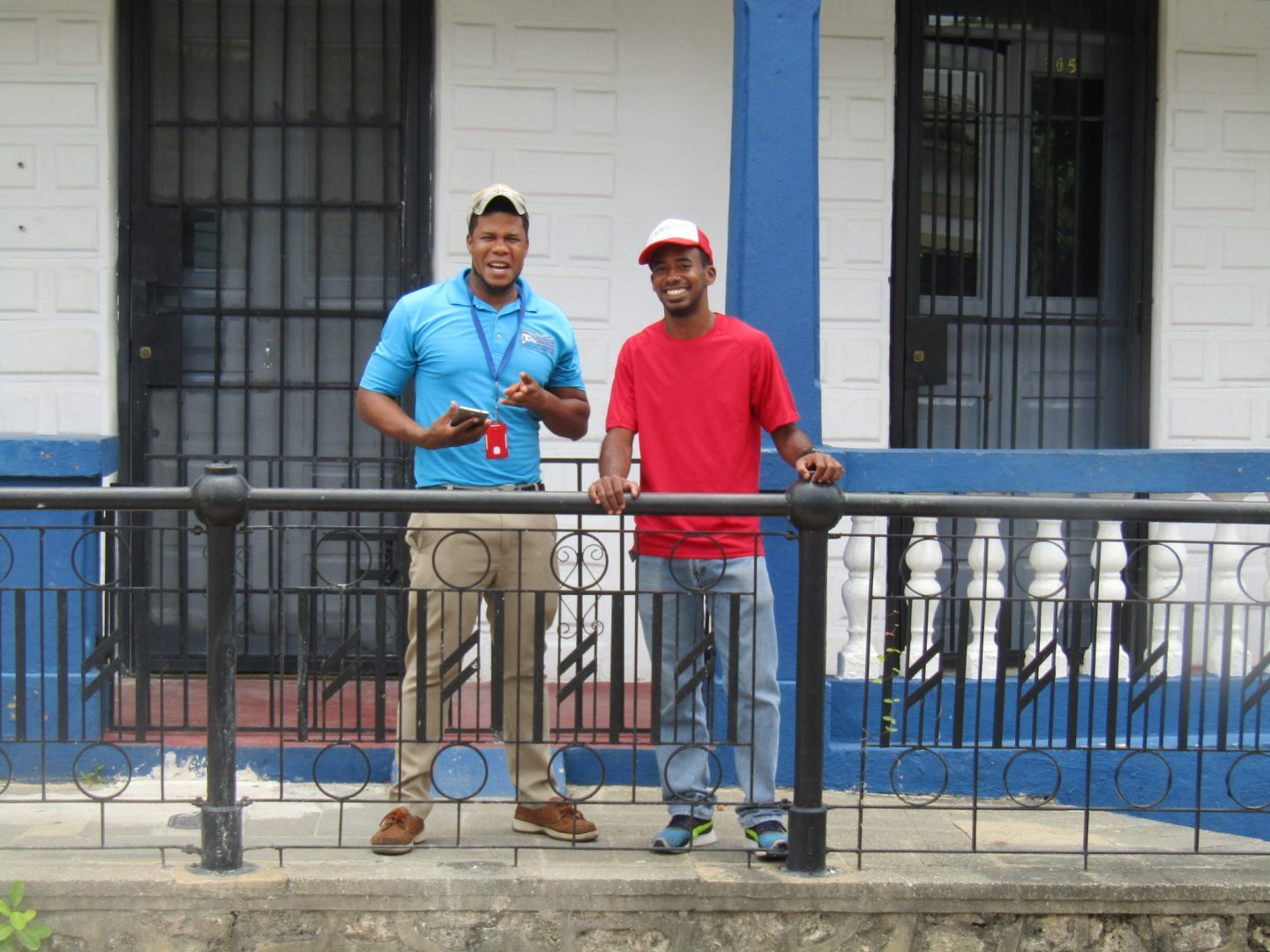 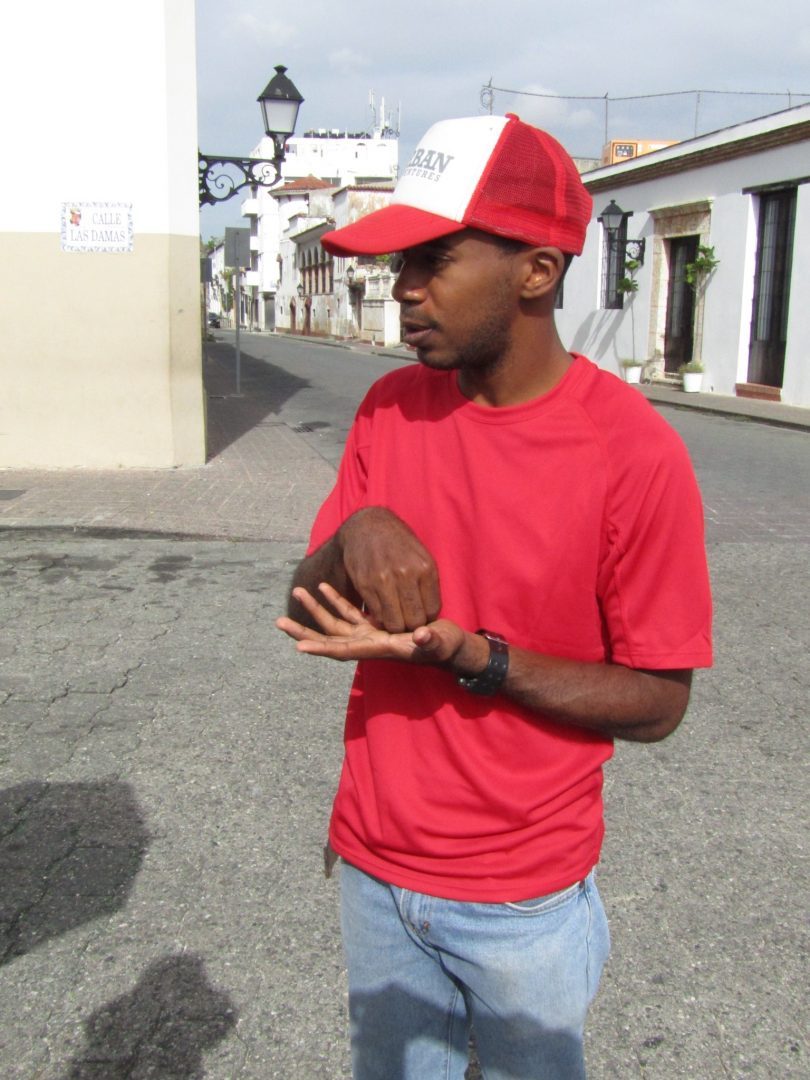 We started at the Fortress of Ozama where our guide told us between laughter that has nothing to do with Osama Bin Laden, instead its the name of the river. ‘La Fortaleza’, as it is known, is the first military structure built by Europeans in America. 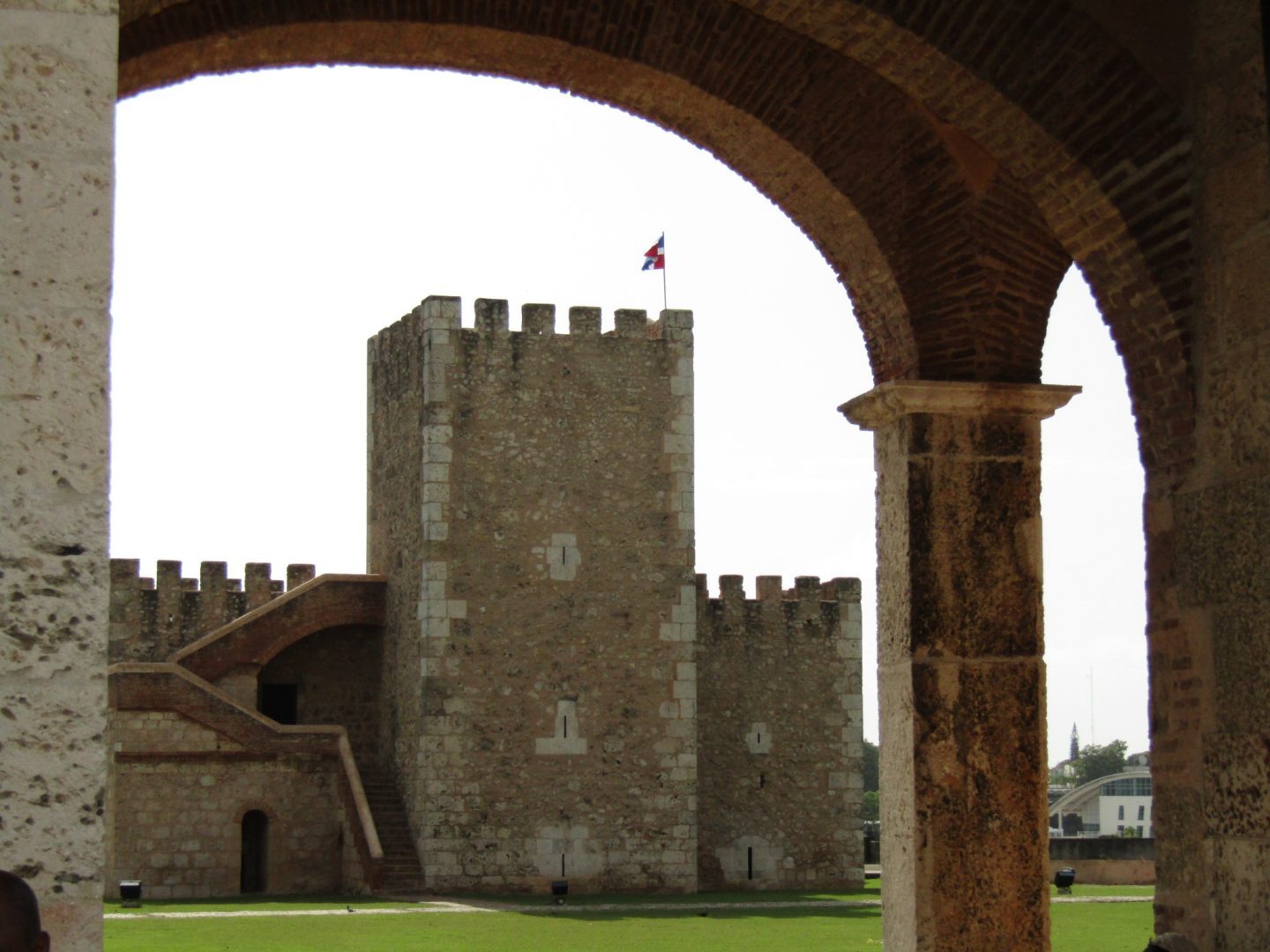 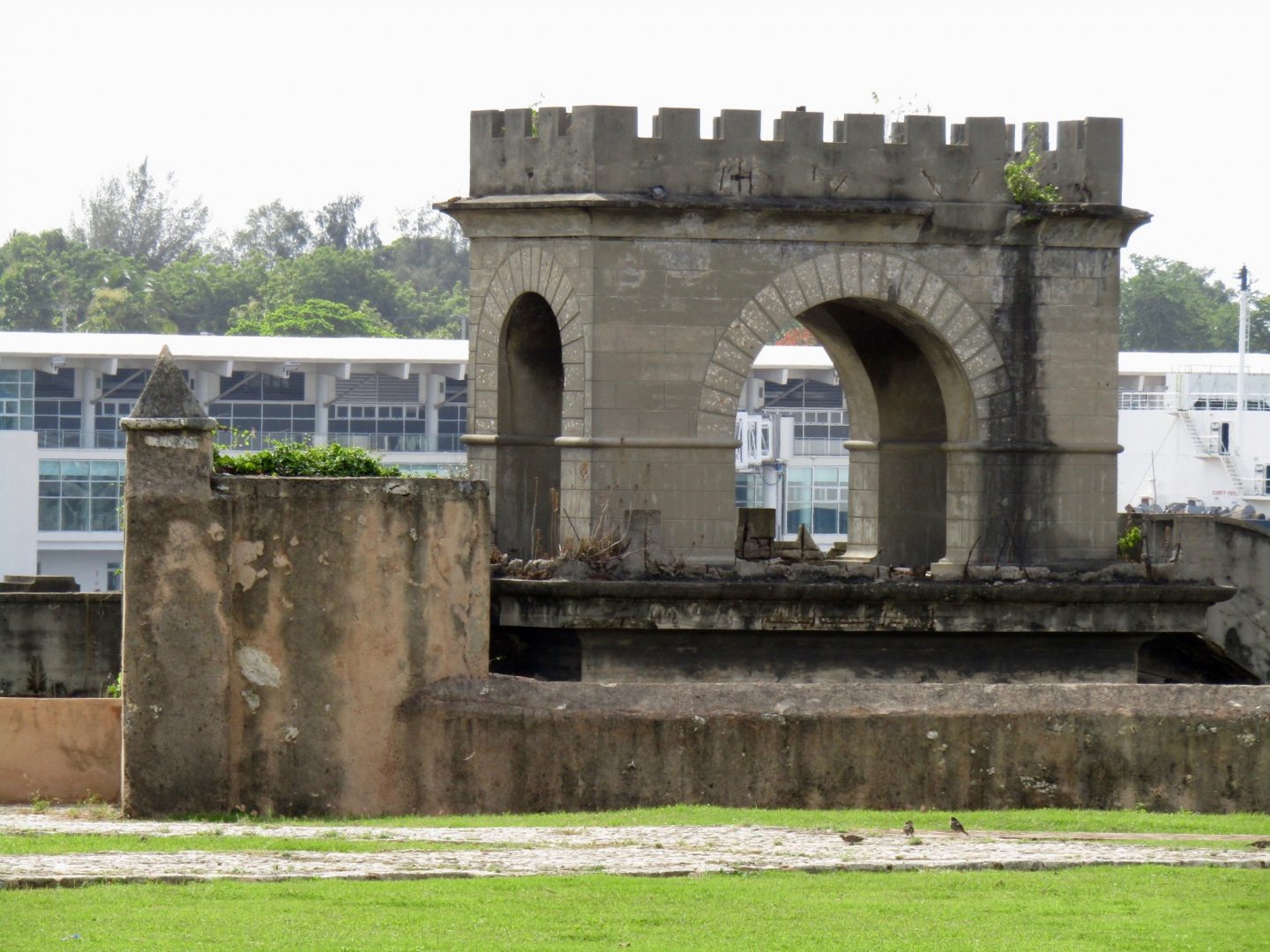 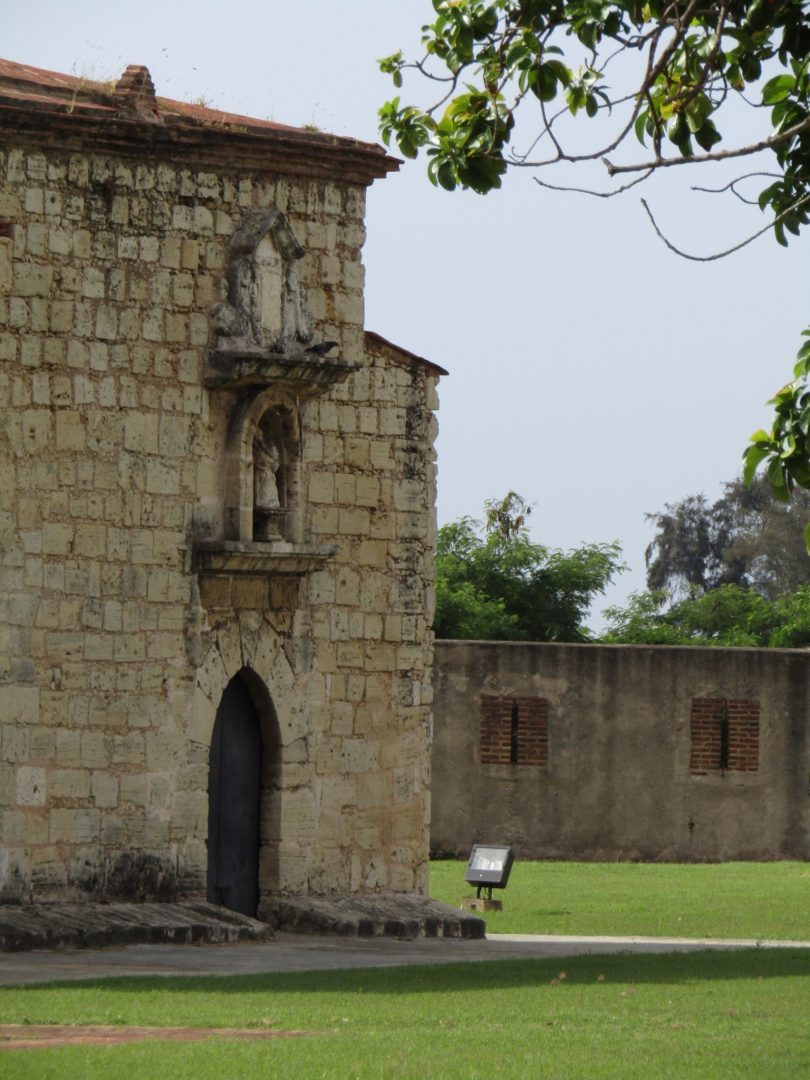 Its purpose was to protect the entrance of the port of Santo Domingo and defend the city from attacks by pirates. Its construction began in 1502 and ended in 1505. Until the 1960s it served as a prison but nowadays it is a space for concerts. 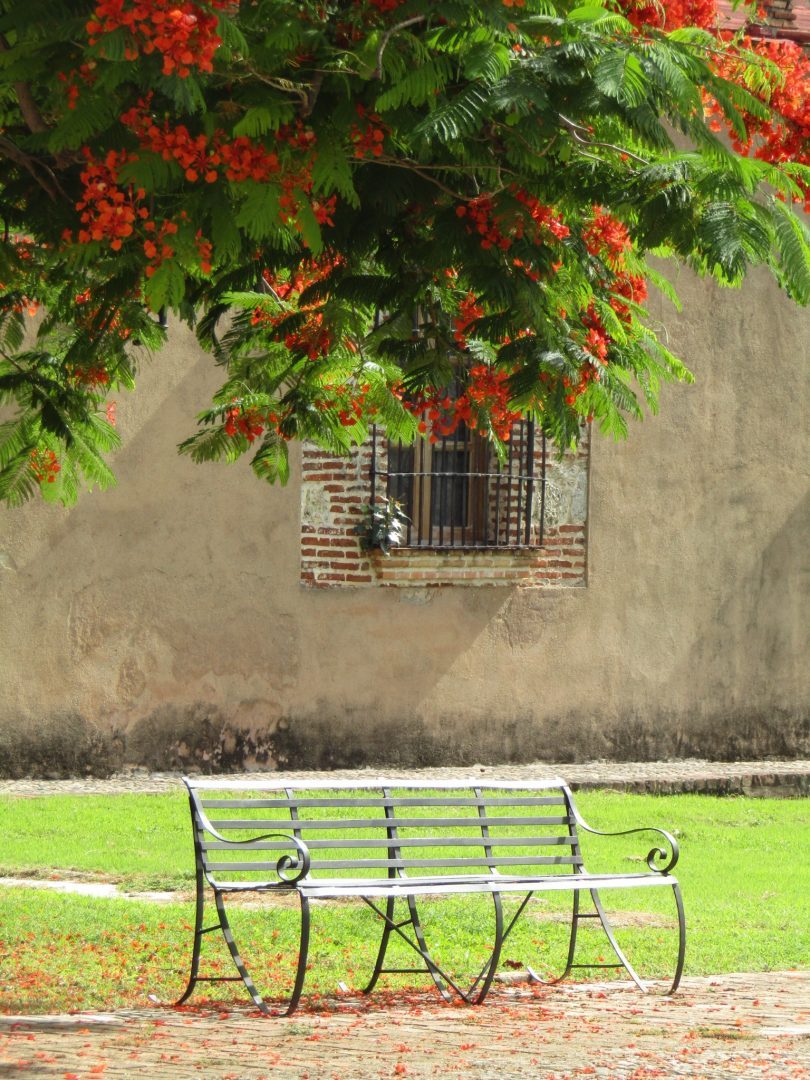 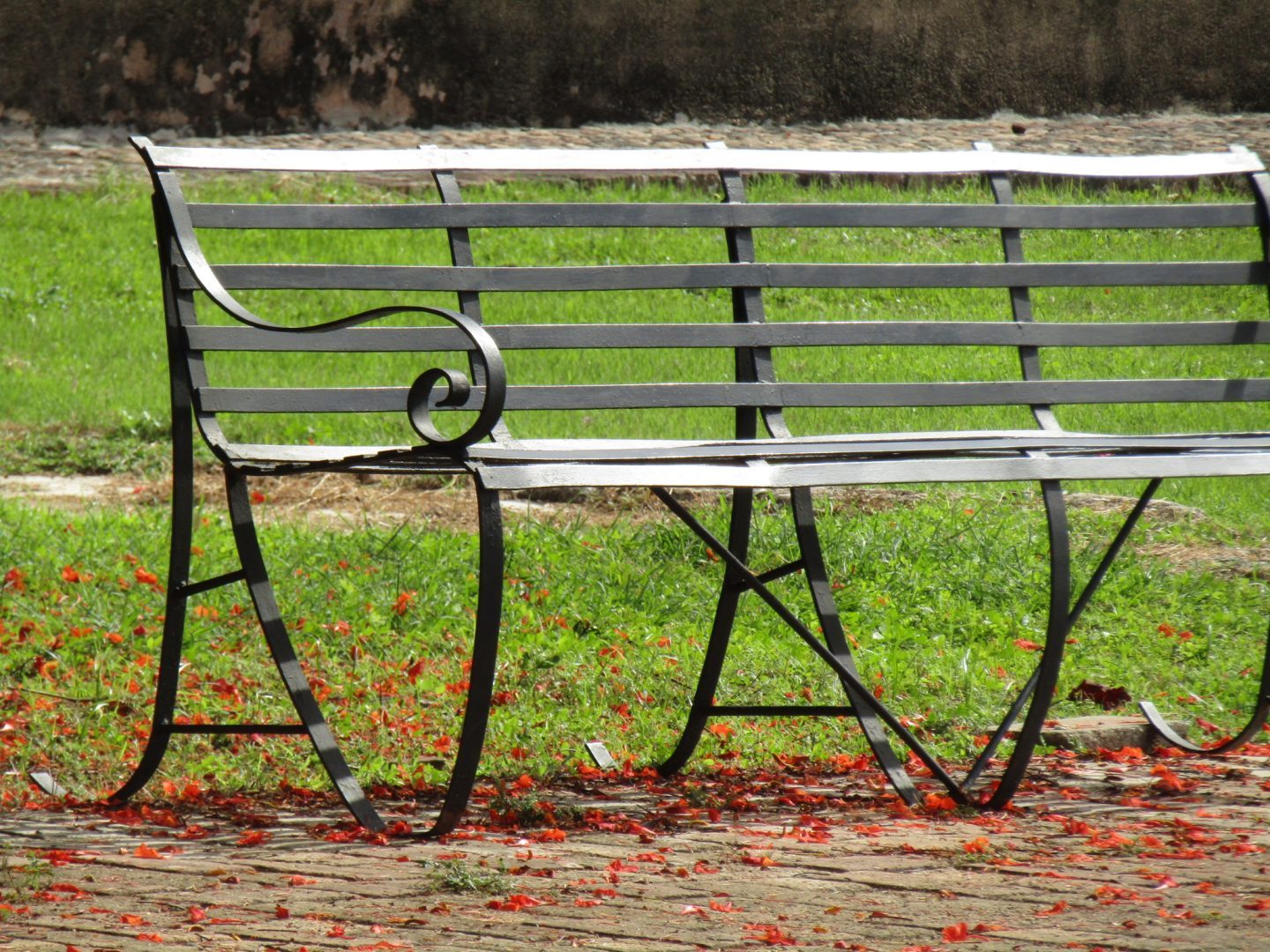 We continue walking until we reached the ‘Panteón de la Patria’, which is a mausoleum. In this site the remains of prominent figures in the history of the Dominican Republic are preserved.

It was one of the last buildings built by the Spaniards and was originally a Jesuit church. The Jesuits were expelled in 1767 and the building had various uses until 1958 when Trujillo restored it and turned it into a mausoleum.

The most impressive thing inside the building is a gigantic chandelier that was a gift from his friend, the Spanish dictator, Francisco Franco. Below the candelabrum there is a flame that burns 24 hours a day. On the sides of the church there are metal bars that contain crosses that according to our guide were really swastics of the Nazis.

The first university and the first hospital in the Americas

We visited the ruins of the first university of the Americas, the Santo Tomas de Aquino University, which since 1914 is known as the Autonomous University of Santo Domingo. It was created by means of a papal bull on October 28, 1538, dictated by Pope Paul III. However, it was not formalized by the Kingdom of Spain until two decades later, therefore it is said that the National University of San Marcos in Peru is officially the first.

The San Nicolás de Bari Hospital, built in 1503, was the first hospital in the Americas. Rather than attending to patients, it served mainly as a place of isolation area due to the new diseases caused by the crossing between the Spaniards and the indigenous people. It was a very rigid construction and could not stand the tropical climate. The walls were very high and ended up collapsing after a few years. 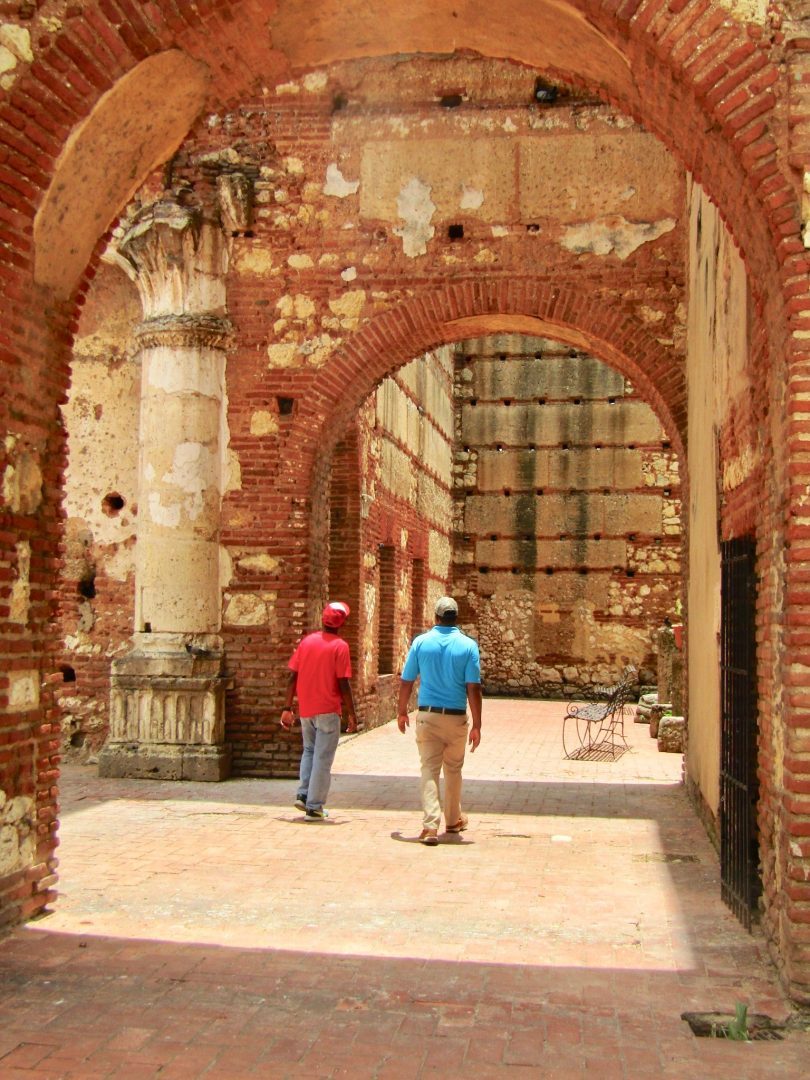 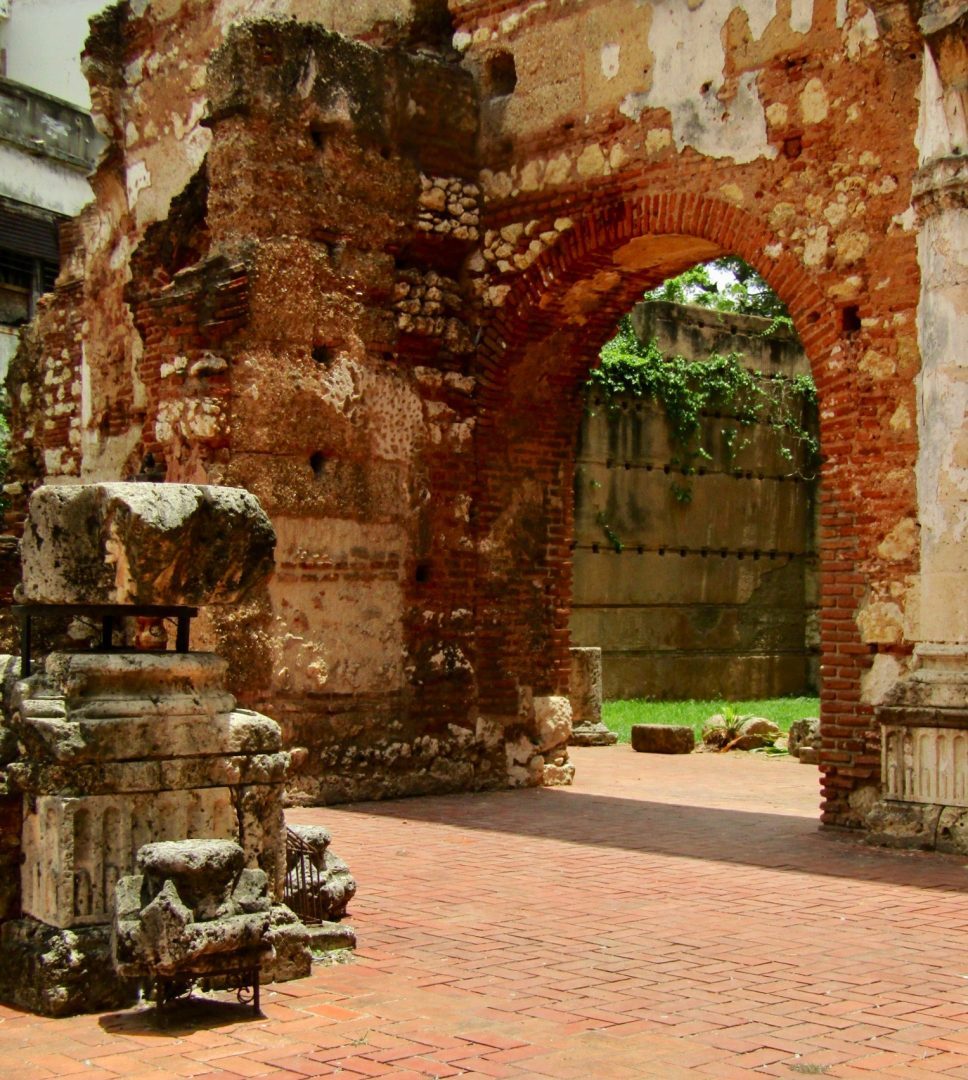 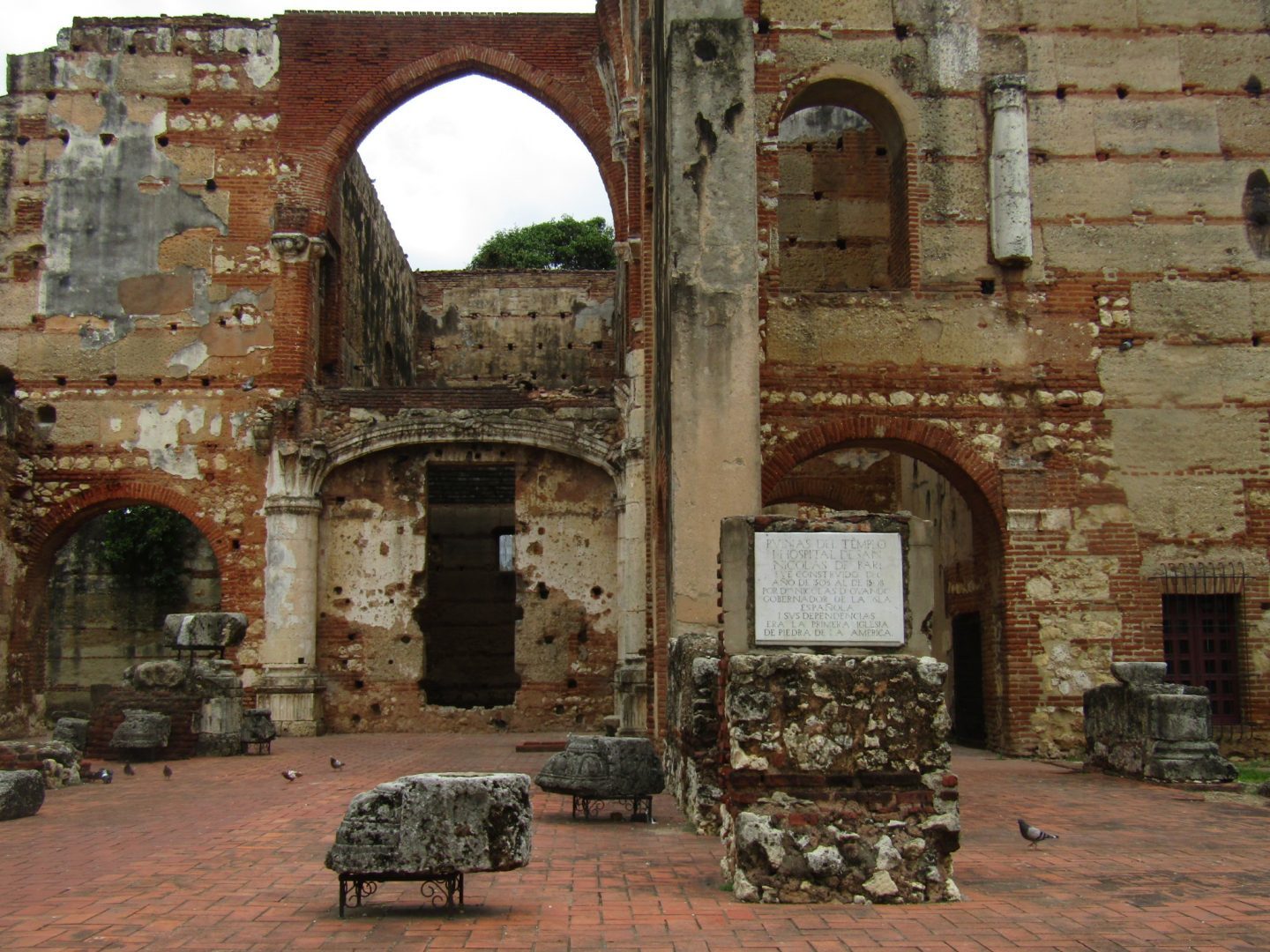 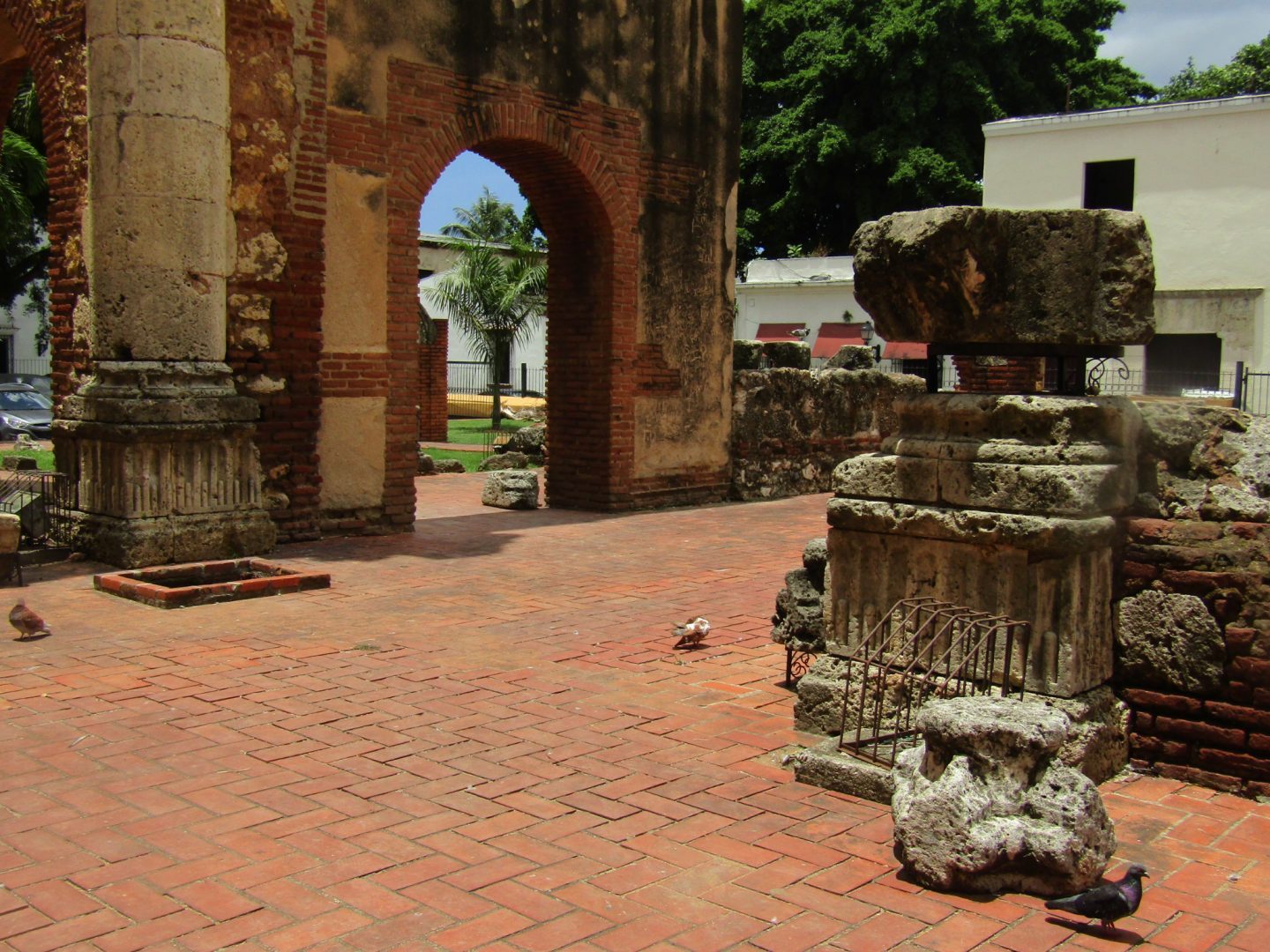 Near the hospital was the first aqueduct that collected water from the rain in large pools, at the highest point of the city. Then the water was transported throughout the city in underground channels. In the 15th century all the houses had access to drinking water with small wells. Nowadays, tours are made through these canals that go from the Ron Museum in Santo Domingo to the Plaza España. 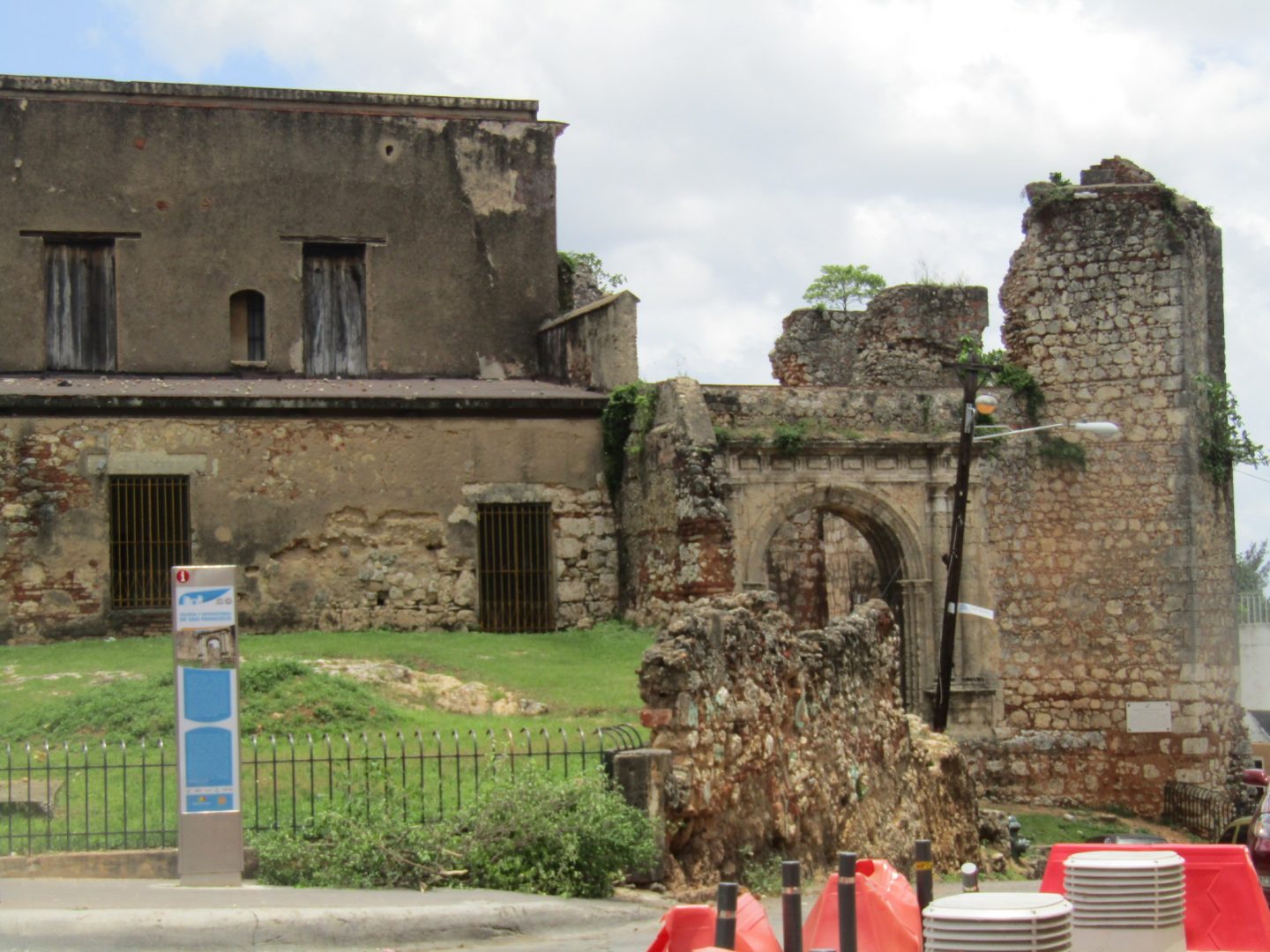 The legacy of the Columbus family

There is a large plaza in the colonial zone that contains a palace called the ‘Alcazar de Colon’ that looks out over the Ozama River. This viceregal palace was awarded to Diego Colon, firstborn son of Cristobal, as a home for the governor of Hispaniola, and his descendants. 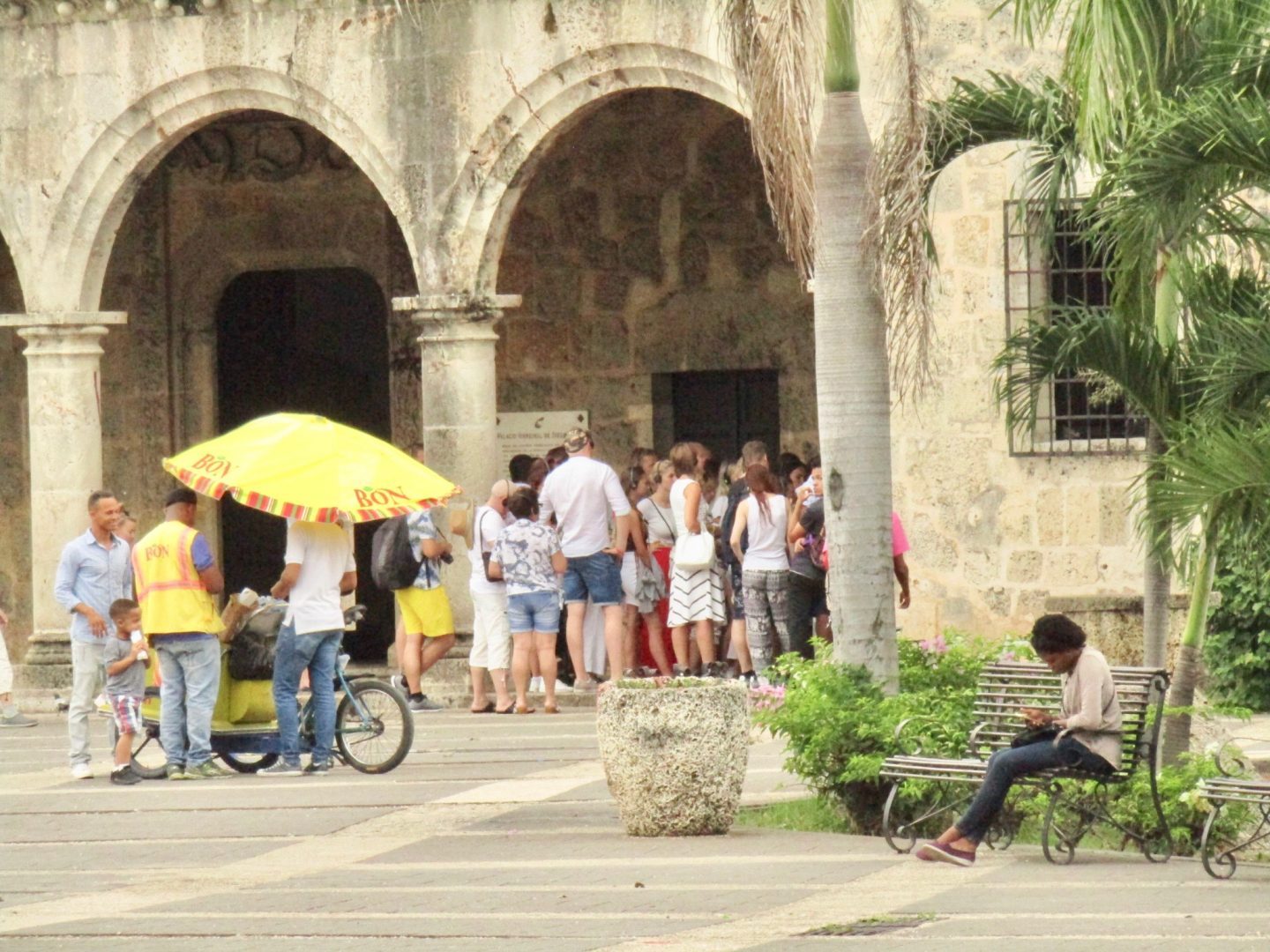 The style of the building is Gothic and was built using coral rocks. The house originally had 55 rooms but only 22 remain after the attack of the pirate Francis Drake, added to the years of poor conservation. It was abandoned for hundreds of years until it was restored in the 1950s and is currently the Alcazar de Colon Museum. Around the palace you will find cozy cafes and restaurants with a wonderful view.

Outside the colonial zone you can see the Columbus Lighthouse, a gigantic mausoleum that was built in 1992. It served to commemorate the 500th anniversary of the discovery of the Americas. It cost about 400 million Dominican pesos (almost 8 million). It seems something the communist would design since it is a huge mass of cement made in the form of terraces. Originally the lighthouse was illuminated but over the years they stopped doing it. They say that the remains of Christopher Columbus are there. But there is a lot of controversy on the subject and they are supposedly in the Cathedral of Seville. According to the historian, Bartolome de Las Casas, the remains of Columbus were moved to Santo Domingo in 1536. They remained until 1795 when they were transferred to Havana, Cuba. 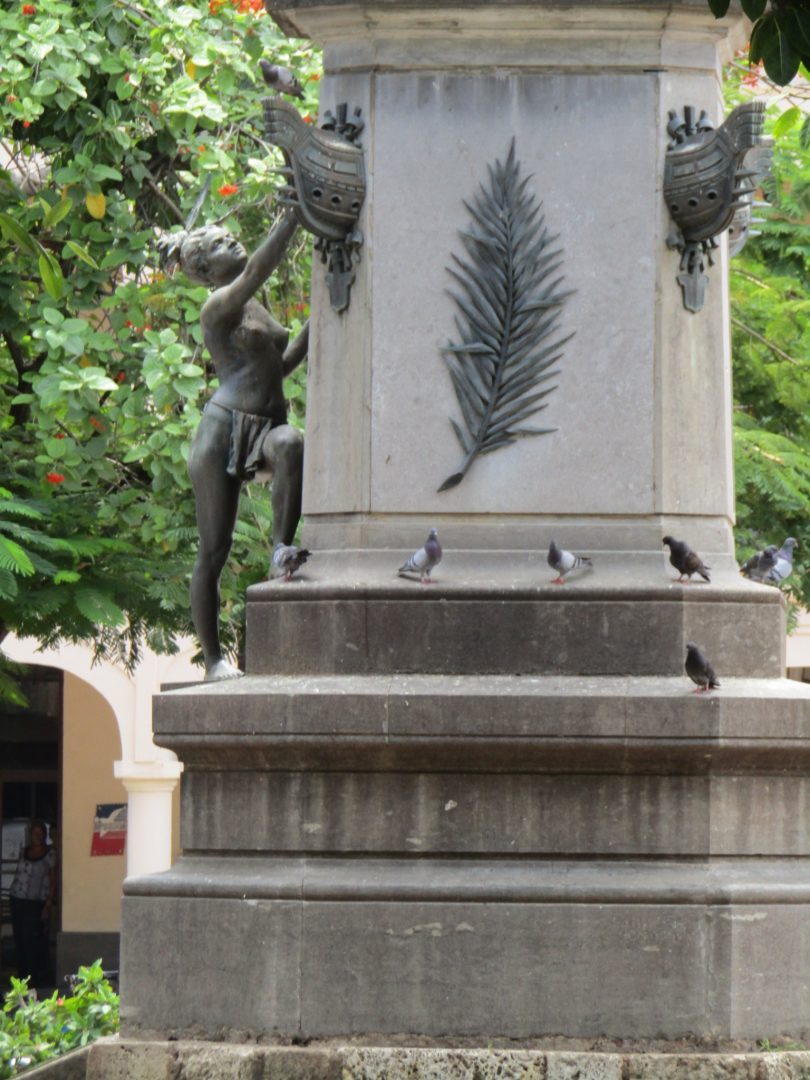 A visit to Santo Domingo is a journey through the history of the Spanish conquistadors in America. Wear good shoes and a cap to be ready to walk around this interesting historical city.

Where to stay in Santo Domingo?

The Marriott chain has 4 hotels in Santo Domingo, capital of the Dominican Republic. They can coordinate experiences with Marriott Moments tours.