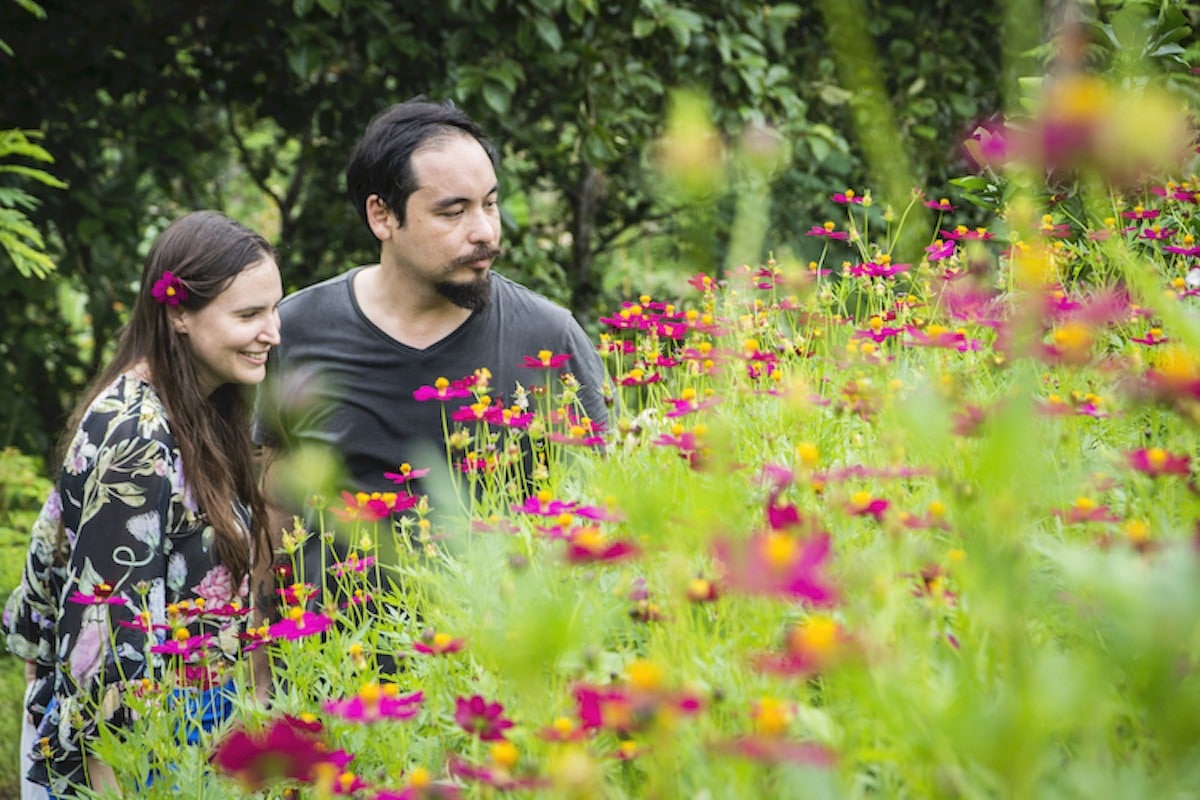 Have you ever sat in a restaurant and wondered where this food comes from? ‘Farm-to-table’ is a movement which is growing in popularity as people prefer to know the traceability of their food. An excellent example of this is the Panga restaurant in Eco Venao on Playa Venao in the Los Santos province of Panama. I took  advantage of the fact that we had a beach day during the Cutarra Experience to visit this place which is one of my favorite projects and get to know their new permaculture tour.

We arrived at Eco Venao and parked our car next to El Café de Acá where they prepared a delicious cup of coffee. Michael Carter met us to start the permaculture tour. Half of our group preferred to go to the beach on the other side of the road. On the beach you can find the surf dojo if you want to take surf or skate lessons. If you simply want to relax, you can go lay in one of the hammocks while refreshing with something cold from Paletas Buena Onda.

Michael Carter manages the permaculture project, farm and everything which is included. His parents are expatriates from the United States, but he has been surfing in Panama since he was 16 years old. After graduating from Florida State University, he decided to return and worked in Contadora Island doing diving and snorkeling tours. Then he moved to Isla del Rey to work in a nursery. He decided that’s what he wanted to do and signed up for the Peace Corp to work with subsistence farmers in Paraguay.

There he lived with local families and learned Guaraní. His work helped them design their farms to increase productivity. It also regenerated the soil to be able to grow and sell plants with nutrients. Crop rotation was done to prevent soil degradation and reduce erosion. He participated in an animal breeding program for meat, milk or eggs, run by the United States government. After two years his time was up and he decided to return to Panama to see farms. He fell in love with the concept of Eco Venao and began working with them.

Tourists can take a tour that takes about 45 minutes unless they have a lot of interest in the subject. Other people come to do internships that last up to four months, including zero waste programs, conservation of endemic species and tropical nurseries.

Permaculture imitates nature to have a community, food, structure, energy, water and materials which are sustainable. Use what you can and don’t over use, since modern agriculture is destroying habitats. While permaculture must work with ecosystems using local resources, existing energy flows with water, light and gravity to create native food sources.

The tour takes you through a forest with rivers where you can see howler and white-faced capuchin monkeys.

Then you arrive at a nursery that reproduces the plants they sow. There are many flowers that attract butterflies and bees. They even produce honey and soaps for Eco Venao. If you are interested in honey produced in Panama you should also visit Boquete Bees.

All plants and trees are marked so that visitors understand what species they are.

They also have chickens and ducks (from my farm in Pedasi). Eggs and crops are sold to local businesses, including the Panga restaurant that receives its products through a wheelbarrow that is mounted on a rope that crosses the river.

A native of Guatemala, Andres Morataya arrived in Panama about 10 years ago, after having had an American girlfriend while living in Costa Rica. His brother opened a small hotel called Casita Margarita in Pedasi. They moved to Pedasi and fell in love with the place. “I was not born in Los Santos, but I want to be a santeño,” says Andres. “Pedasi is a Macondian town where you go to the park in the afternoon and see the children playing, it is very picturesque and colorful.”

Many years ago he wanted to be an industrial engineer which he studied for three years. But he felt it was not his thing and abandoned it. His father told him he had three months to return. Instead he looked for jobs while finding his passion. In Costa Rica he worked as a translator for the US embassy and had a lot of free time, so he cooked. His friends called him when they went to the supermarket to see what ingredients they bought for him to cook. He loved to cook, so he started taking some basic courses and learned watching videos on the Internet.

In Pedasi he worked as the cook of the prince of Liechtenstein, until he met Tuira Torrijos on one of his trips to the city. He decided to move to the capital and began working with Manolo Caracol in Casco Viejo. That work marked his life and gave him his “gastronomic north”. Manolo was the pioneer in Panama to really look for and use local products and appreciate the culture. He doesn’t sell Coca Cola because Manolo refused to sell it. He married Tuira and they had two daughters. Life in the city was very sacrificed, so she convinced him to move back to Pedasi.

His first restaurant is called “Panga” with a double sense of words since “being in panga” means not being cool and is also a craft boat. Without pangas in Panama there would be no fishing, nor so many things. “We are a small craft boat that is not the one with the most money, nor investors,” says Andres. This restaurant started in Venao Cove but the owners of Eco Venao convinced Andres that their interests were aligned and at the beginning of 2019 he moved the restaurant to this hotel.

Andres is famous, since his restaurant has been published in publications such as Condé Nast and the New York Times. “Moving to the middle of nowhere put us at the center of everything” and it is literally true. He was nominated at the World Restaurant Awards among 29 restaurants worldwide that are off the map.

What makes this place so special? Without a doubt it is the quality of the products, the economic prices and the simplicity of the menu. All products are local, from the Eco Venao farm, to the milk from Cañas and fish from the port of Pedasi. In the interior you must create human relationships and then create business relationships. As he lived on the site for so many years, people call him to tell him what kind of seafood they have to see if he wants to buy it. He makes cheese and ketchup in-house.

Unlike other restaurants that are super elaborate, Panga has an honest kitchen. “We are not a kitchen of dots, foam and lines, we present rich food without having to do a show.” The most representative dish of the place is the grilled snapper in wood with a moringa chimichurri and cracklings from the scales. He buys from fishermen who fish fish by fish and then cooks it slowly, using the whole product.

Undoubtedly, it is worth visiting Playa Venao and strolling around Eco Venao to get to know a hotel and restaurant complex with a policy to be sustainable with the community and the environment.

The buffaloes left in Coclesito by General Omar Torrijos