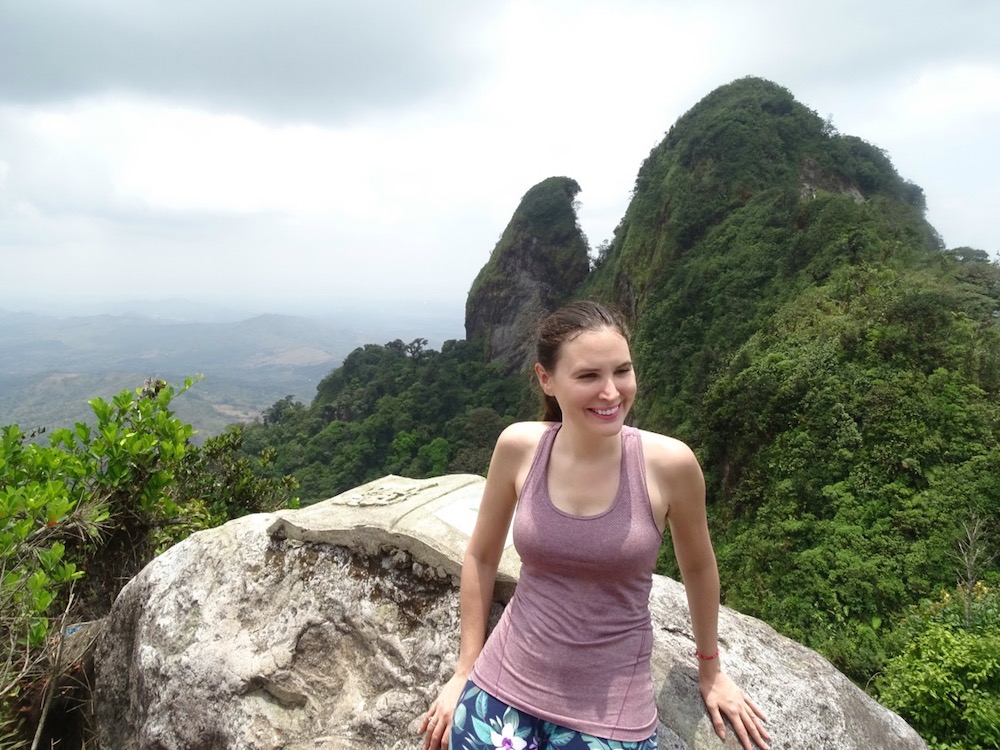 After hiking in Cerro El Gaital, I received another invitation from my friend Nidia of NB Adventures to climb Cerro Trinidad. Anyone driving on the Pan-American Highway has seen this hill located at the height of Capira. If you go from Panama City it will be on your right hand, after the Campana curves. The road to reach it is in perfect conditions. You must head to Lídice, until you reach the junction that divides the towns of Trinidad (left), El Cacao (straight) and El Aguacate (right). At 970 meters above sea level, this hill is the last significant elevation before the capital from the interior of the country.

The ‘Central Cordillera’ of Panama is a continuation of the ‘Cordillera de Talamanca’ that begins in Costa Rica. It continues after Cerro Trinidad, but with very low hills. After, the great Central Isthmus fault begins which made it possible to build the Panama Canal.

The entrance to Cerro Trinidad is without signaling, but we went with guides who knew where to park. We left the car on the road next to a paddock. The entrance was through the property of a family that does not charge for access. However, we tipped them for their kindness. The man was cutting the grass with his machete and told us that he was also doing the guidance service.

We found a water apple or pomarrosa tree that was full of fruits. You must choose the darkest ones which are the ripe ones. They are very refreshing, therefore, we stopped to eat some at the beginning and end. In addition, they planted other things like cocoa and coffee for own consumption.

This hill is named after the town. Also, it is said that it was for three girls who were lost in that place. It is a place full of legends. The locals will tell you about the witches and the night bird song called ‘turrututú’. General Victoriando Lorenzo frequented the area before and after the Thousand Days War. At that time, Panama was part of Colombia.  We fought for the liberals, however, the conservatives won and sent the general to be shot.

The first part of this path is the most difficult. Once my body warmed up, I could climb without problems. The climb is very steep, if you are not in good physical conditions it is better to avoid this hill. This is not a popular place for hiking in Panama. You should keep in mind that it is dangerous and you should go with people with experience. It is not recommended to do inappropriate things like trying to climb the stone on the top or go to the second peak, which is very dangerous.

A Brazilian who had done trekking with us on other occasions, decided to climb Cerro Trinidad with his girlfriend, without a guide. It seems that both of them slipped on the top, causing him to lose his life in October, 2019. This trail is especially dangerous at night or in the rainy season since there are frequent mudslides and there are no park rangers on the road.

To climb to the top we took two different routes, the one they had always taken and a new one. We climbed using ropes, but we slid down a tunnel that reminded me of something like the tunnel that Alice took in Wonderland.

The landscape has many large stones that have been detached from Cerro Trinidad for millions of years. A stone was next to a stone wall covered by a type of moss that I had not seen before. It was very soft to the touch and its colors ranged from shades of white, chocolate to orange.

On the top you can see panoramic views that reach the district of La Chorrera. It is advisable to go early to appreciate the views, as it can be filled with fog. Although it really is luck. Many say that the top looks like a face but it can only be seen from the crossing.

The Herrera family placed a cement sculpture of an Adventist Bible on top. Almost everyone who climbs the Cerro Trinidad poses to take pictures with it.

Cerro Trinidad, like Cerro La Cruz, is part of the Campana National Park. This hill marks the northern limit of the park. However, the protected area extends to the south where the towns of El Espave and Bejuco are located. The Chica viewpoint is one of the most visited points because of its beautiful views towards the Ensenada de Chame.

With 4,925 hectares, Campana National Park was the first in all of Panama. It was established in 1966 to protect the east basin of the Panama Canal. Its territory rises from 400 meters to 1,030 meters above sea level in Cerro Campana. It was part of the El Valle de Anton volcano. This is visible in the cliffs and types of volcanic igneous rock which are found. The headwaters of the rivers in the area begin in the park, including the Chame, Perequeté and Caimito rivers on its Pacific slope. Trinidad River and several of its tributaries are part of the basin of the Panama Canal. Many who climb Cerro Trinidad take the opportunity to cool off the heat by bathing in the Trinidad River at the end of their walk.

26 species of endemic plants are found in the Campana National Park. Like 198 species of trees and 342 species of shrubs. Within the park you can find four types of forests, which are different types of humid and tropical forests.

It rains a lot in the area, exceeding 2,500 mm every year. It is one of the few places in the basin of the Panama Canal where you can see species of plants from hot and cold climates. This was included in a study done by the National Association for the Conservation of Nature (ANCON) that identified the flora and fauna of the park.

It is an excellent place for birdwatchers since some 267 species have been registered, including 48 that are migratory. Trogons are the most spectacular for their colors, which are very vibrant. In January and February, as well as from June to September, migrations of the elanio earwig can be seen. Birds which are endangered can be seen, including white-tipped sicklebill, violet-bellied hummingbird and bronze-tailed plumeleteer.

39 species of mammals live in this park, including deer, coati, marmoset, opossum, raccoon and two and three finger sloths. 62 species of amphibians live in the park, including the famous golden frog. Research on the golden frog can be seen in the El Nispero Zoo in El Valle de Anton and at the Smithsonian National Zoo in Washington D.C. You can also see the giant frog, which is the largest amphibian in Panama.

Be sure to calmly climb Cerro Trinidad to appreciate the flora and fauna. Along the way I saw many types of orchids, bromeliads, ferns, flowers and plants, as well as caterpillars, and insects.

The buffaloes left in Coclesito by General Omar Torrijos