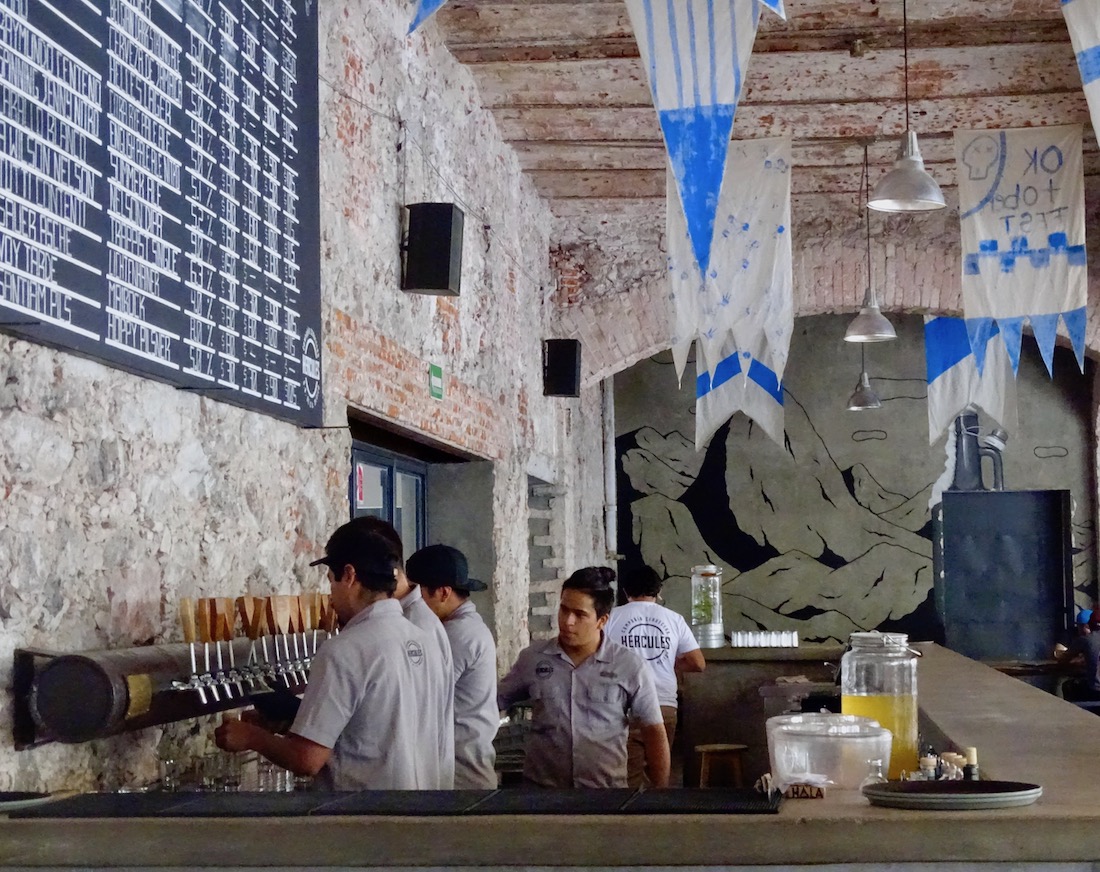 You’ll find Queretaro about two and a half hours from Mexico D.F.. This city offers a high quality of life, so many people are escaping the overpopulated capital to move to Queretaro. It also has a lot to offer tourists. The Tourism Secretariat of Queretaro has done an excellent job establishing more than 15 routes to facilitate the planning of a trip depending on the travelers and their interests. If you visit Mexico you will realize that its citizens like to drink. Therefore, we are going to focus on two routes: Route of the ‘Cantinas’ and Craft Beer Route.

The wine of Queretaro is of very good quality, unfortunately we did not have time to visit one of the vineyards. We partially made two routes, which are quite easy to travel, in the Historic Center that is a UNESCO World Heritage Site since 1996. You will enjoy walking through the colorful and picturesque streets while you find a variety of restaurants, boutique hotels, ‘cantinas’ and shops. At the very least you should plan to stay two nights in this Mexican city.

If you want to breathe and feel the Mexican culture, then you must visit the ‘cantinas’ of Queretaro. Much of the history of this city was forged in the ‘cantinas’, where people tell anecdotes, dream yearnings, close projects, but above all they make friends, ‘compadres’ and ‘comadres’. The style of ‘cantinas’ varies and many have been passed down for generations. In total there are 28 host ‘cantinas’ that are part of the route. Gerardo Cuanalo, Secretary of Tourism of Queretaro, took us to visit two.

The first ‘cantina’ we went to was founded in 1944, being the oldest. I did not notice the name when entering, when I asked, they answered “201, where pure ‘pedotes’ come to the bar”. ‘Pedote’ is an affective way to refer to a person who abuses alcoholic beverages and has a habit of getting drunk. Then they introduced me to Saul, who has been the owner of the ‘cantina’ for 42 years. He offered us ‘chamorro’ which is the specialty of the house, but we could not accept his offer as we have just eaten.

Cantina la Selva Taurina must be about 50 years old. But it was bought 30 years ago. Today it is operated by the grandchildren of the original buyer. They have five branches in Queretaro. The family has a fondness for bulls; Therefore, ornaments and photos are part of their personal collection. In this canteen I found a snake in a jar of mezcal. I found it a bit disgusting, so I didn’t try it.

The Craft Beer Route in Queretaro was developed to promote and positionally promote innovation and create local flavors. This route has 19 stops in the city that offer local beer, as well as world varieties consumed in Queretaro. The Association of Craft Brewers of Mexico places Queretaro within the first five places of production of this beverage.

Some breweries make quite particular elaborations with local ingredients. Cervecería Toro uses ingredients such as avocado leaf, seasonal fruit and basil.  While Cervecería Fundadores has aromas and flavors such as vanilla, honey, coriander, coffee, citrus and cocoa. La Trinchera is a speak easy that is found within Gracias a Dios cantina.

Colanegra is a new cocktail bar that promotes sustainability. Therefore, they put the husks of the fruits and herbs in vinegar to clean the bar in an eco-friendly way. In addition, they cook them to make other productions, for example a cordial drink with grapefruit peel. They lowered their waste by 80%. Johnathan, bar chief, told us that the trend before was the farther the better. Now it is kilometer zero, they buy Mexican fruits from local markets.

This bar is not located in the tourist area, however they have another called Dodo Café that is located in the Historic Center of Queretaro. We went there to meet Miritha Porter Arellano to taste craft beers. She tells us “we all speak something in common, no matter where in the world you are from, nor the language in which you speak; there are beers everywhere and everywhere there are brewers. ”Miritha is part of‘ Adelita Cerveceras ’, a group of 80 female brewers throughout Mexico that also participates in Latin American meetings.

Most of the beer projects in Mexico are family opertated; the wife, children and parents are involved to maintain the business until it becomes somewhat profitable. Men usually continue to work in offices and wives see suppliers, serve customers, charge, do marketing and also take care of children.

That night we tried three types of beer. She asked us to have a drink, passing the beer through the palate. The English Traveler is the beer she produces with her brand ‘Cerveceros Arellano’. It is a best bitter, an English style, with malt, bread, biscuit, caramel and orange flavors. The beer had no label since it was one of the last ones left after participating in a competition. Then we tried a black IPA or cascadian black ale from Cervecería Hércules and a miller stout from Cervecería Principia de Monterrey. With the proliferation of craft beers you should now know the types of beer just as if you were ordering a wine by its grape variety.

170 years ago the story of Hercules began, an old textile factory that was so important that the neighborhood has the same name. That land had several owners until it came to belong to Cayetano Rubio, a Spaniard from Cadiz. In September 1838, he bought the land and began the construction of the Hercules textile factory. He brought his machinery from England and made a two-kilometer aqueduct to bring water to the factory.

The name Hercules is given in honor of Diego de Tapia, who was the first owner of the land in 1591. On his coat of arms appeared the columns of Hercules. At its peak, the factory came to employ more than 2,500 workers in Queretaro. As so many people worked in it, they decided to populate the area around them. The tradition was to inherit the works that passed from generation to generation. Currently the Hercules factory is still operating, but only with about 50 workers who produce threads, fabrics and blankets.

The Hercules Factory is located seven kilometers from the historic center of Queretaro along the route of the old aqueduct. The neighborhood is very picturesque and is changing to be more tourist-friendly without losing its essence.

Hercules Brewery is a Cultural Space

When we went we saw the beautiful main entrance that is currently closed. There are plans to convert this part of the complex into a boutique hotel. Today, Hercules is synonymous with beer, not cloth. You must park your car in a large parking lot to enter this cultural space. What used to be a large factory now has an abandoned look that gives personality to the establishments within the complex.
The first place we saw was a store called Olivia 60 that makes handmade soaps. Of course, we went in and ended up buying some, since the brand has no chemicals and uses natural ingredients. They have even soaps to bathe the dogs. This part is full of cute shops, including Cata Cafe, and some furniture stores. Inside the complex was another sustainable clothing store made by local designers. It is worth mentioning that Queretaro has just obtained the designation of a creative city of design by UNESCO.

A small movie theater with lazy-boy armchairs gives you the best sound experience. Upon entering the space you feel as if you had transported to the seventies, since it has a vintage look.

This site produces beer that can be purchased elsewhere in Mexico. It is still craft beer but on a larger scale and is stored in wooden barrels as is done with rum or whiskey. In the middle there is a biergarden or beer garden that in October was decorated for the celebration of Oktoberfest. It is a fairly familiar space with picnic tables under large white fabrics that serve to protect from the sun. Hercules Brewery produces fixed beers including several types Pale Ale (Indian, White and English), IPA and Czech Pilsener. Apart from having seasonal beers, we ordered one call ‘Redshift’ with Jamaican flower that was very good.

If you wish to have lunch you can go up to the Planta Alta Restaurant that has its own organic garden on site. It is essential to make reservations since the place is somewhat small and it is quite crowded especially on weekends. This restaurant does a fusion between traditional elements of the semi-desert of Queretaro with local ingredients. We ordered several dishes to share including beef gizzards with basil chimichurri, shrimp toast with ax callus and seasonal mushroom rice.

Travel the same routes we did in Queretaro or select your favorites from the long list of options offered by this city in Mexico. 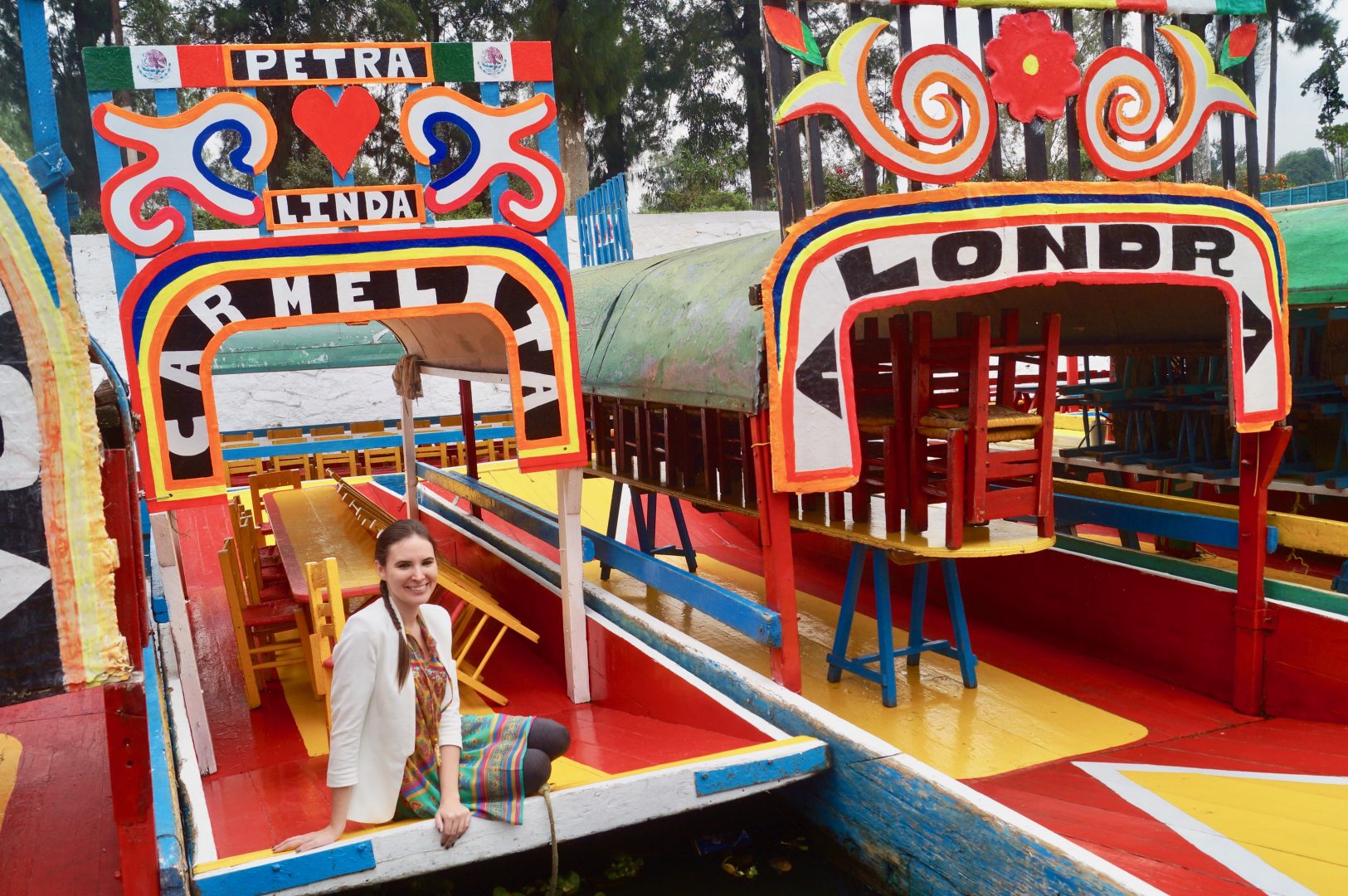