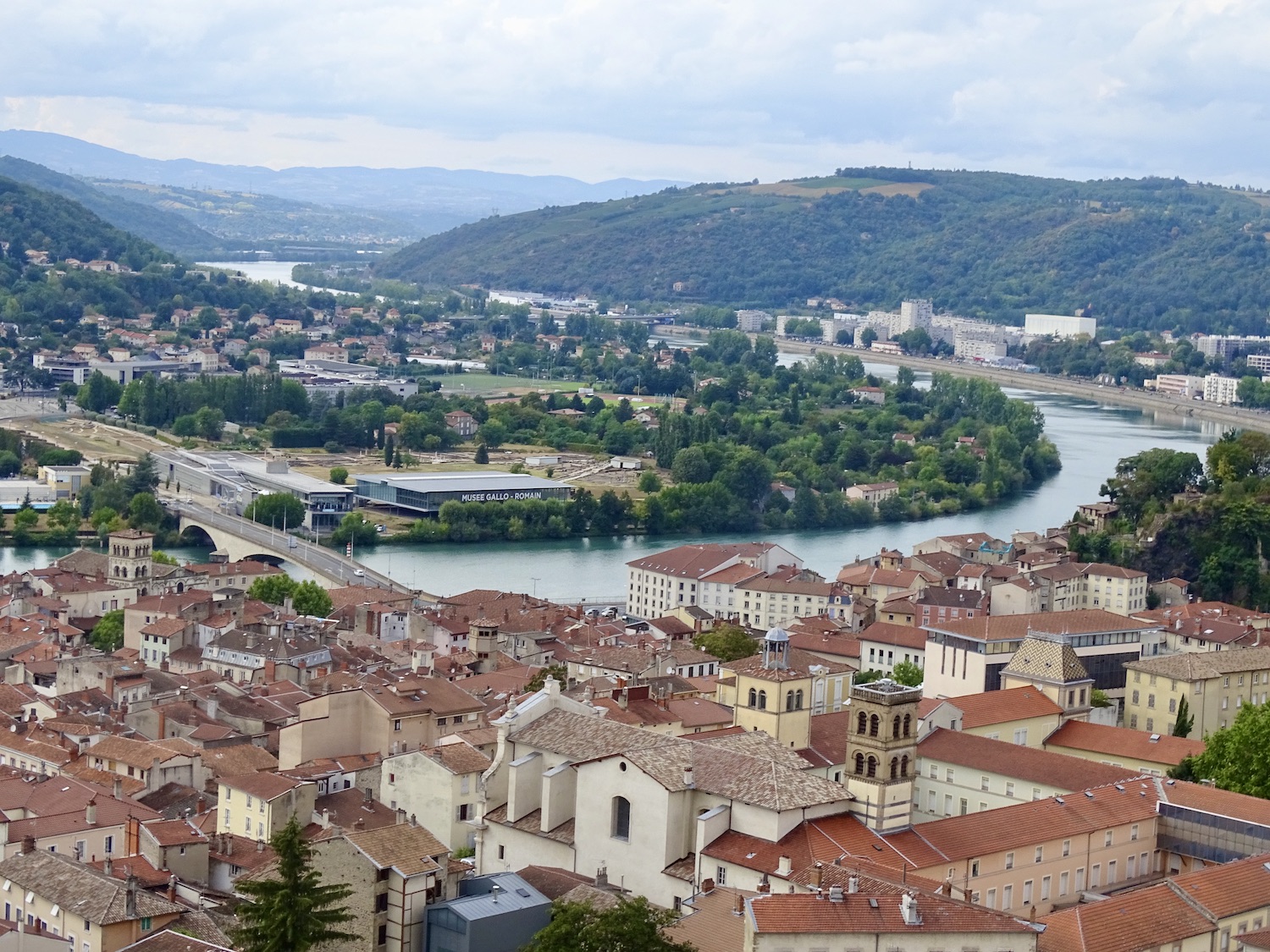 Vienne is a town located about 30 kilometers south of Lyon on the banks of the Rhône river. While it is a small town, there is enough to do to spend a night or two in Vienne in France. Not to be confused with Vienna, capital of Austria, that back then was called Vindobona.

I stayed in this town for six nights in the house of a friend of a friend and absolutely loved it. What surprised me the most was the history of this place, which in antiquity was known as Saint-Romain-en-Gal. Over 2,000 years ago it was one of the most important cities in Roman Gaul.

This location was the capital of the Celtic tribe known as the Allobroges, until it was conquered by the Romans in 121 BC. In 47 BC it was transformed into a Roman colony by Julius Cesar. The Roman rule ended in 275 AD. There were Christians here since 177 AD, which later transformed the town into an important Roman Catholic location.

This museum is a must see if you are going to Vienne. It sits on top of a seven hectare park across the Rhône river. From the town center, it is about a 10 minute panoramic walk. The site of the museum was going to be a high school. In 1967 archeologists started to dig and found the vestiges of an entire Roman city!

The site was acquired by the Rhône department and classified as a historical monument. This is one of the biggest archeological sites in France devoted to the Gallo-Roman civilization. It was one of the wealthiest Roman cities, which led archeologists to describe the site as a small Pompeii.

The Gallo-Roman Museum is closed on Monday and Tuesdays. Opening schedules vary, but they range from 11 a.m. to 10 p.m. The museum is divided in four areas which cover the history of Vienne in antiquity; economics and crafts; mosaics and daily life in a Roman home. Without a doubt, the mosaic work is absolutely impressive.

You will start your visit inside, then head outside. The ruins include thermal and public baths, workshops, dwellings, paved streets, little palaces, gardens, fountains, warehouses and more.

On a corner there is a small vineyard with many types of grapes. The museum hosts events including the Vinalia, which was the Roman grape harvest. This event is done on the last Sunday of September and allows visitors to understand the similarities between ancient gastronomy and wine to our current reality. It was curious to see roses by the vineyard. I learned in Santa Rita Winery in Chile that they are planted to be able to notice if there are any pests.

Temple of Augustus and Livia

Located right in the center of Vienne is the Temple of Augustus and Livia. The temple is raised on a podium with Roman Corinthian decoration. It was built in different periods, with the rear part being the oldest. It was probably built between 20-10 BC during the reign of Emperor Augustus. Livia was Augustus’ wife which was also a subject of veneration. The oldest inscription dedicated the place to “Rome and to Augustus Caesar, son of the divine (Julius Caesar)”.

This was the heart of the Roman forum. Before it stretched out towards the east with a huge, enclosed public structure. This building was converted into a church at the beginning of the 5th century (which is why it still exists!). During the Reign of Terror (French Revolution) it became an atheistic temple for the Cult of Reason that was anti-clerical. It was later restored between 1823 to 1853. Now the Temple of Augustus and Livia is quite close to the town hall and has plenty of restaurants surrounding it. We sat down in the afternoon to drink some beers by this ancient temple.

This garden was discovered in 1945 when building a new hospital on Mount Salomon and the old hospital was torn down. Archeological research done in 1965 produced the detailed floor plan of the temple and the surrounding forum. They concluded that this temple was built in the 1st Century AD. It was the administrative center of the Gallo-Roman city with two arcades that form a forum portico with ornamental patterns, a large stone wall and a large luxurious townhouse with decorated patios. This municipality assembly could host 800 magistrates seated in terraces.

Entry to the Archaeological Garden of Cybèle is free and there is a nice garden with benches right next to it. There is a delicious kebab place called Didim in the building next to it, which is called the Maison du Pilori and is also quite old (for modern standards).

Locals call it La Pyramide de Vienne which was more of a triumphal monument modeled after one of the monuments found at Rome’s Circus Maximus. This pyramid dated back to the 2nd century AD. It has four arches resting on a portico. Legends that date back to the 13th century believed that the pyramid was the tomb of Herod Archelaus (Ethnarch of Judea that was exiled to Vienne in 6 AD) or of Pontius Pilate. Back then nobody knew what the Roman monuments were used for, so there were plenty of theories.

This pyramid of Vienne is further away than other attractions; getting to it requires about a 10 minute walk from the train station. Which makes sense since you needed space for the chariot races. This Roman circuit would have been about 460 meters long with the pyramid in the center. Next to it there is also a luxurious hotel called The Pyramid that has a two-Michelin-star restaurant.

The best view of the theatre can be seen up in Mont Pipet which is one of the things to do in Vienne. In ancient times, the summit was a religious esplanade with temples that formed an extension to the theatre. It was one of the largest Roman theaters in the whole empire housing over 13,000 spectators. In Gaul it was the second largest one after Autun. This theatre was built between 40-50 AD with circular vaulted corridors that allowed spectators to get around. The stage walls were decorated with columns and statues.

In 1834, archaeologist and museum curator Claude-Thomas Delorme managed to prove that the relics were those of a Roman theatre not an amphitheater as everybody believed. However, excavations were not done until 1908 to 1938. The monument was unearthed, under thousands of square meters of earth and restored.

Next to it there is a second smaller theatre called Odeon that was built between the 1st and 2nd century AD during the reign of Hadrian (the same that built the Hadrian’s Wall between England and Scotland). Here is where musical performances would have taken place with a capacity for 3,000 people. My friend told me that Odeon still has not been restored because of lack of funds.

Back in the Roman times this Théâtre Antique de Vienne was used for entertainment including plays, musicals, dances, sports and battles; as well as for official and civic gatherings. Since 1981 it has been used for entertainment during the summer. The most famous event is the Vienne Jazz Festival which takes place for two weeks between June and July.

The Théâtre Antique de Vienne is closed on Mondays and opening hours vary during the year. It usually has a small entrance fee, but it was free on the day I went.

What to see and do in Vienne?

Palace of the Popes is the Biggest Medieval Gothic Palace in the World!